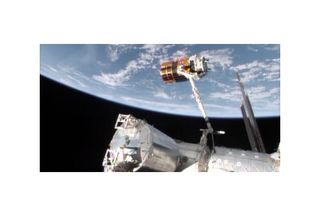 Japan's HTV-4 unmanned cargo ship is seen perched at the tip of a robotic arm on the International Space Station on Sept. 4, 2013 as it departed the orbiting lab. The cargo ship delivered 3.5 tons of supplies to the station during its one-month stay.
(Image: © NASA TV)

Astronauts on the International Space Station released an unmanned Japanese cargo ship from its docking port Wednesday (Sept. 4), setting the stage for the arrival of a new private delivery ship later this month.

Japan's robotic H-2 Transfer Vehicle 4 (HTV-4) left the space station at 12:20 p.m. EDT (1620 GMT) after one month linked to the orbiting lab's Earth-facing Harmony module. NASA astronaut Karen Nyberg released the disposable cargo ship back into space using the station's robotic arm. HTV-4 launched to the space station on early August to delivery 3.5 tons of supplies to the station's six-person crew. The spacecraft is slated to burn up in Earth's atmosphere during its re-entry on Sept. 7. [See photos of Japan's HTV-4 mission to space]

The departure of HTV-4 , which is also known as Kounotori-4 (Kounotori means "White Stork" in Japanese), clears the Harmony docking port for the arrival of the first Cygnus cargo ship test flight by the commercial spaceflight company Orbital Sciences Corp. Orbital has a $1.9 billion contract with NASA to provide at least eight cargo delivery missions to the space station using its Cygnus spacecraft and Antares rockets. The first Antares rocket test flight launched successfully in April. The first Cygnus module is due to launch to the space station on Sept. 17. Orbital is one of two companies with cargo delivery contracts with NASA. The California-based SpaceX has a $1.6 billion contract for 12 delivery flights using its own unmanned Dragon capsules and Falcon 9 rockets. SpaceX has launched two of those missions so far.