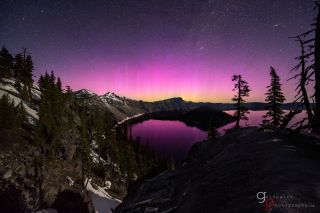 The purple glow of the aurora borealis dances over Crater Lake in this beautiful night sky photo.

"Near 11 p.m., I was staring upward towards a clear night sky when suddenly, without much warning, an unmistakable faint glow of the aurora borealis began erupting in front of me. I quickly packed up my gear, hiked down to my truck, and sped to a north facing location," Goldpaint told SPACE.com in an email.

Auroras are caused when charged particles from the sun slam into Earth's magnetosphere and interact with particles in our planet's atmosphere. At different altitudes, the solar particles are likely to collide with different types of atoms, producing different colored auroras.

"With adrenaline pumping, I raced to the edge of the caldera, set up a time-lapse sequence, and watched northern lights dance until sunrise," Goldpaint said. "The moon rose around 2 a.m. and blanketed the surrounding landscape with a faint glow, adding depth and texture to the shot."