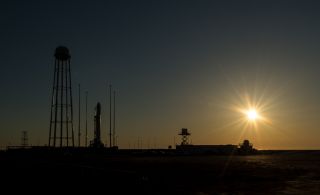 A U.S. spaceflight company is hoping the third time's the charm in order to launch a brand-new rocket into space on its maiden flight today (April 21).

After two delayed launched attempts, the privately built Antares rocket is once again poised to blast off from a seaside pad at NASA's Wallops Flight Facility on Virginia's Eastern Shore. Liftoff is set for 5 p.m. EDT (2100 GMT).

Today's launch attempt will be the third in a week for Antares, which was built by the Dulles, Va.-based Orbital Sciences Corp. A minor mechanical glitch thwarted a launch try on Wednesday (April 17) just minutes before liftoff. Strong winds prevented and an attempted launch on Saturday. [LaunchPad Photos: Antares Rocket Ready to Fly]

The Antares rocket is designed to launch Orbital's unmanned Cygnus spacecraft on cargo delivery missions to the International Space Station for NASA. Orbital has a $1.9 billion contract to provide at least eight cargo deliveries using Cygnus and Antares, but first the company wants to make sure the rocket will perform as expected.

"Obviously we would like to have gone Wednesday. But going through the prelaunch procedures a couple of times now is great experience for our launch team," Orbital spokesman Barron Beneski told SPACE.com in  an email. "Practice now will pay dividends later when we are down to a small launch window, less than five minutes, for our [space station] resupply missions later this year."

Orbital Sciences has a three-hour window for today's  attempted launch. The 13-story Antares rocket will lift off from the new Launch Pad 0A at the Mid-Atlantic Regional Spaceport at the southern tip of Wallops Island, Va., where it shares land with NASA's Wallops Flight Facility is based. The NASA center has long been the home of the agency's small sounding rocket launches and balloon science projects.

"We have also been pleased with the performance of the vehicle and the launch facility. We have not been working any technical issues, which has been encouraging," Beneski said. "That's remarkable since this is a first time launch for the rocket and the pad."

Today's launch attempt will not carry a full Cygnus spacecraft into orbit. Instead, the rocket is topped with a mockup that will mimic the weight of an actual cargo ship. The rocket is also carrying three coffee cup-size Phonesat satellites — named Alexander, Graham and Bell — as part of a space technology experiment for NASA. A fourth nanosatellite, called Dove 1, is also being flown for a commercial customer, Orbital officials said.

NASA's space shuttle fleet retired in 2011, so the space agency is relying on Orbital Sciences and SpaceX to fly American cargo to the International Space Station. NASA officials also hope to launch American astronauts to the station using private spaceships by 2017. Currently, the U.S. space agency relies on Russia's Soyuz spacecraft to ferry crews to and from the station.

There is a chance that observers along  much of the U.S. East Coast could spot the Antares rocket soaring toward space during today's launch test. NASA has advised local observers to watch the launch from its Wallops Flight Facility Visitors Center or the nearby Assateague National Seashore. Maps and graphics released by Orbital officials, however, suggest the launch could be seen from as far north as Portland, Maine, and as far south as Charleston, S.C., weather permitting.