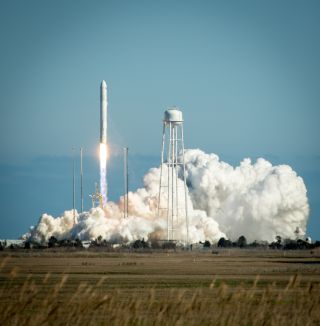 A new commercial U.S. rocket soared into the Virginia sky Sunday  (April 21) on a debut flight that paves the way for eventual cargo flights to the International Space Station for NASA.

The third try was the charm for the private Antares rocket, which launched into space from a new pad at NASA's Wallops Flight Facility, its twin engines roaring to life at 5 p.m. EDT (2100 GMT) to carry a mock cargo ship out over the Atlantic Ocean and into orbit. The successful liftoff came after two delays caused by a minor mechanical glitch and bad weather.

Built by the Dulles, Va.- based spaceflight company Orbital Sciences, the Antares rocket is a two-stage booster designed to launch tons of supplies to the International Space Station aboard a new unmanned cargo ship called Cygnus. Orbital has a $1.9 billion contract with NASA to provide at least eight resupply flights to the station using Antares and Cygnus. [See photos of Antares rocket's 1st launch]

"Antares has delivered the A-ONE test mission payload into orbit," an Orbital Sciences commentator said. There were cheers out of Orbital's launch control room at ever successful stage of the launch, with the team breaking out in handshakes and hugs as the rocket reached orbit.

Orbital had much riding on today's successful liftoff, which marked a critical test flight of a new commercial launch system.

The company has invested about $300 million developing the Cygnus spacecraft alone, slightly more in the rocket itself, Orbital executive vice president Frank Culbertson told reporters after the successful launch. The result, he added, was an amazing show with apparently no significant glitches aside from a brush fire ignited near the launch pad.

"This was a majestic liftoff during ascent," said Culbertson, who is a former NASA astronaut and Orbital's general manager for advanced programs. The Antares rocket as a low thrust to weight ratio, which means it has a slow start rising off the launch pad, he added. "It was a beautiful liftoff."

"This is an incredibly historic day," Bolden told Orbital's team. "You couldn't have gone any farther without today. This was a first, huge step." [Launch Video: Antares Soars Into Orbit on 1st Flight]

Antares is the largest rocket ever to launch from NASA's Wallops Flight Facility. It lifted off from the new Pad 0A, which is at Wallops but managed by the Mid-Atlantic Regional Spaceport (MARS) and overseen by the Virginia Commercial Spaceflight Authority. Altogether, the Commonwealth of Virginia and MARS officials spent about $140 million to build the new launch pad complex.

Today's launch was expected to be visible from locations all along the East Coast, from Maine to South Carolina, weather permitting. Orbital even released several photos advising what the rocket would look like from famous landmarks around the Capitol.

Orbital initially tried to launch the Antares rocket on Wednesday (April 17) but called off the attempt when a vital data cable separated from the rocket earlier than planned, about 12 minutes before liftoff. The company spent Thursday analyzing the glitch and opted not to try for a Friday launch due to foul weather. Strong winds forced a delay on Saturday, but Mother Nature cooperated for Sunday's launch.

In a Twitter post before launch, officials at NASA's Wallops facility reported that the site's visitor center was completely packed for today's launch, despite the delays. MARS officials hope the Orbital launches will help serve as a new source of tourism for the region.

"It's definitely something we're all excited about," Basia Shields, manager of the Lighthouse Inn on nearby Chincoteague Island, told SPACE.com before Sunday's liftoff. "I mean this is the off season for us and almost every room is booked just for this thing."

Orbital Sciences is one of two companies with NASA contracts for commercial cargo deliveries to the space station. The other firm is Space Exploration Technologies (SpaceX) of Hawthorne, Calif., which has a $1.6 billion deal for 12 space station cargo missions.

With the retirement of NASA's space shuttle fleet in 2011, the agency is relying on commercial companies like Orbital Sciences and SpaceX to provide the vital resupply services — and, eventually, crew launches — required to keep the space station fully stocked and staffed. Before the commercial program, NASA was dependent on Russian, Japanese and European cargo ships for supplies, and it still temporarily relies on Russian Soyuz vehicles for crewed missions.

"This is a new way of doing business, and with any new investment, there is a risk," Alan Lindenmoyer, head of NASA's commercial crew and cargo program at the Johnson Space Center in Houston, told reporters after the successful launch. "But it sure is nice to see a return on that investment and things go your way. I think this is a great day for everyone."

"This is the culmination of a plan that we've been on for several years," NASA deputy administrator Lori Garver told reporters before the Wednesday launch try. "I am thrilled to have two competitors."

Garver said that at least two companies providing cargo services for NASA is vital since it assures access to space and does not allow one company to have a monopoly on station cargo deliveries.

Orbital and SpaceX also offer slightly different services. Unlike SpaceX's Dragon space capsules, which can return cargo to Earth from the station, Orbital's Cygnus vehicles are disposable and are intentionally burned up in the atmosphere at mission's end.

During the test launch, the Antares rocket launched on a southeast trajectory over the Atlantic and took 10 minutes to reach its target orbit 155 miles (250 kilometers) above Earth. The rocket carried an 8,377-pound (3,800 kilograms) dummy payload to mimic the weight of an actual Cygnus spacecraft. The mockup was packed with 70 sensors to record how the Antares rocket launch would affect a Cygnus vehicle.

"It looks like all the expectations we had for today's flight were beautifully met," Lindenmoyer said.

The dummy module is expected to spend at least two weeks in orbit before burning up in Earth's atmosphere, Orbital officials said.

Antares also carried three coffee cup-size Phonesat satellites — called Alexander, Graham and Bell — into orbit as part of a space technology experiment for NASA's Ames Research Center in California. The tiny 4-inch-wide satellites use commercial smartphones as their main computers. Another small satellite the size of a bread box, called Dove-1, also rode into orbit as part of a commercial agreement for the California-based company Cosmogia. Dove-1 is reportedly an Earth-observation and remote sensing satellite, according to a NOAA remote sensing license document.

With the test flight now complete, Orbital is now looking forward to up to two more launches this year, both of them headed to the International Space Station. That first cargo flight, a demonstration mission, could launch in late June or early July, Orbital officials said.

"This is not a one-shot deal," Lindenmoyer said. "They're going to be here awhile."

Culbertson said that Orbital hopes to launch Antares rockets from Wallops every three to six months for the cargo delivery flights.

UPDATE:This story was updated at 7:52 p.m. EDT to include new comments and details of today's Antares rocket launch.