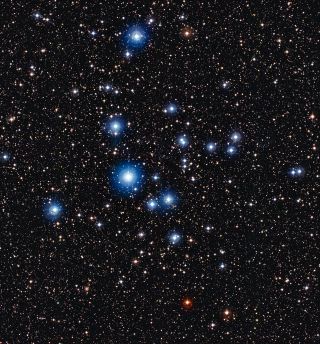 An incredible new photo taken by a telescope in the Southern Hemisphere shows a cluster of blue stars burning brightly about 1,500 light-years away from Earth.

The picture, released last week by the European Southern Observatory, gives the viewer an up close and personal view of the NGC 2547 star cluster — a relatively young group of stars shining in the constellation Vela, "The Sail."

"Although their exact ages remain uncertain, astronomers estimate that NGC 2547’s stars range from 20 to 35 million years old," officials from the ESO wrote in a statement. "That doesn't sound all that young, after all. However, our Sun is 4,600 million years old and has not yet reached middle age. That means that if you imagine that the Sun as a 40 year-old person, the bright stars in the picture are three-month-old babies."

Stars usually form in clusters like this one. They can have as few as 10 stars or as many as several thousand, ESO officials wrote.

This star cluster is not only populated by young stars. While the brightest, blue stars are the youngest, there are also a few yellow and red stars further along in their stellar evolution that round out this cluster.

Over the course of several hundred million years, the stars in NGC 2547 will drift apart, moving into new parts of the galaxy. Monitoring these stars now could help scientists understand how stars evolve.

"The members of a cluster were all born from the same material at about the same time, making it easier to determine the effects of other stellar properties," ESO officials added.

The cluster is not the only celestial wonder in this image. Other, faint stars that are not part of the cluster appear in the background, while fuzzy, distant galaxies that are perhaps millions of light-years away can also be soon.

Scientists used a telescope at the La Silla Observatory in Chile to take the incredible cluster's photo.

The ESO is run by 15 different countries and is the most productive ground-based astronomical observatory in the world.