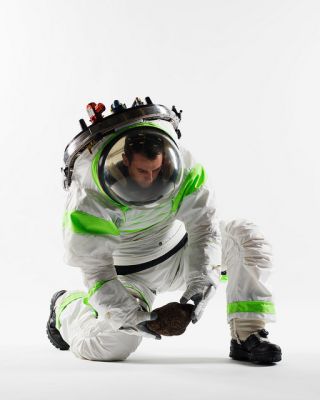 It might make the astronaut wearing it look like a real-life Buzz Lightyear, but a new prototype spacesuit that NASA just finished testing represents the first major overhaul in spacesuit technology since 1998.

Flexible, white, and lime green accented, the suit — known as the Z-1 — is designed not only to help astronauts comfortably maneuver during spacewalks in microgravity, but also to deftly move about when walking on the surface of a planet or other smaller heavenly body, like an asteroid.

Plus, it's fashionable: The suit bears an unmistakable resemblance to the costume worn by "Toy Story" animated film character Buzz Lightyear.

The spacesuit in use today for spacewalking, known as an EMU (Extravehicular Mobility Unit), was designed to aid in building the International Space Station, but a previous iteration of the EMU was used for moonwalks during the Apollo missions. While both of these models serve their respective purposes, the creators of the Z-1 wanted to develop a more versatile outfit for space. [Introducing NASA'S Future Spacesuit, the Z-1 (Infographic)]

To that end, the new prototype is markedly different in a few ways.

"One of the big differences is the rear-entry design," Amy Ross, one of the engineers responsible for the suit's development, said during a NASA video interview. "So the shuttle EMU splits at the waist and you put pants on and you put the top on separately and they connect in the middle. Whereas with this suit, the subject crawls in through the back, and then we just shut the door."

Creating a back-entry suit solves a few of the problems spacewalkers often face during trips to the International Space Station. Using airlocks to depressurize is a time consuming, exhausting process. By using a rear-entry design, the astronauts won't need to go through an airlock at all. The suit hooks up to the outside of the spacecraft using the "space port" opening, and the spacewalker simply climbs in and detaches.

"We think it's less prone to injury," Ross says, "especially shoulder injury which can occur with the shuttle EMU-donning method."

NASA is in the process of crafting a new life-support backpack — known as the PLSS 2.0 — for the suit as well. The backpack model in use today is sensitive to contamination and quickly uses up oxygen, making it difficult for astronauts to conduct long spacewalks. The new backpack model is more efficient and less susceptible to contaminants.

Although the Z-1 and the PLSS 2.0 aren't ready to be joined into one prototype yet, eventually they could combine to create an even more efficient space-traversing suit.

The new prototype is extremely flexible, but a bit heavy. Current suit models weigh around 100 pounds (45 kilograms), but the Z-1 clocks in at an unwieldy 158 pounds (72 kg). Even on Mars — where the gravity is one-third that of Earth's — those extra 58 pounds might make a significant difference.

To gauge the way the spacesuit might perform in space, NASA's engineers took their testing to the desert. By having the astronauts perform "geology duties" (collecting rocks, bending down to pick up material, etc.), the suit's designers saw how the prototype performed by comparison to the EMU in use today.

"It sounds very heavy," Ross says, "but once you inflate the suit, it does help to support itself."

NASA aimed to design the Z-1 around the most challenging aspects of any mission astronauts might be faced with. If an astronaut is sent to an asteroid or Mars, the engineers wanted to be sure that the spacewalker is protected from background radiation while still able to move around the planet's surface.

But that doesn't mean that developers won't want to use this research to specialize the suit eventually. By understanding exactly what a suit should protect against in certain environments and then designing the prototype around those, Ross said, NASA should have the capability to produce a suit specifically tailored for any mission.

The Z-1 should be ready for liftoff on its first mission sometime in 2015.