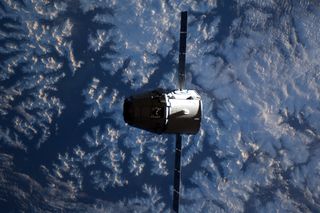 SpaceX's Dragon unmanned cargo spacecraft successfully docked with the International Space Station on May 25, 2012, the first commercial vehicle to do so. Photo taken by Dutch astronaut André Kuipers.
(Image: © ESA/NASA)

NASA will announce new agreements on Friday (Aug. 3) with some of the private spaceflight companies hoping to build new commercial space taxis to fly American astronauts into space and back.

The announcement will come at 9 a.m. EDT (1300 GMT) in a press release, with a televised press conference to follow at 10 a.m. EDT (1400 GMT), NASA officials said in a statement.  The space agency will also hold a separate teleconference with reporters to discuss details of the new private space taxi agreements.

"Through CCiCap, NASA is stimulating the private sector to develop and demonstrate human spaceflight capabilities that could ultimately lead to the availability of commercial human spaceflight services for both commercial and government customers," NASA officials said in a statement.

During the televised announcement, which will be broadcast and webcast live on NASA TV, several top NASA officials will unveil the winners of CCiCap funding. They include:

You can watch the televised briefing live here: http://www.nasa.gov/ntv

The CCiCap initiative is the latest round of NASA agreements with commercial partners to encourage the development of new crew-carrying spacecraft. So far, four companies are developing manned spacecraft through funded Space Act agreements with NASA. They include: Boeing Space Exploration of Houston; Blue Origin of Kent, Wash.; Sierra Nevada Space Systems of Louisville, Colo.; and Space Exploration Technologies (SpaceX) of Hawthorne, Calif.

In May, SpaceX launched a successful unmanned flight of its Dragon space capsule to the International Space Station as part of a separate agreement with NASA to provide robotic cargo deliveries to the orbiting laboratory. The Virginia-based company Orbital Sciences Corp. is also building an unmanned supply ship to provide NASA delivery flights under a similar deal.

NASA is currently relying on the development of private U.S. spacecraft to replace the crew and cargo launch capabilities formerly provided by the space shuttle program. The shift, agency officials have said, will allow NASA to focus on its deep-space exploration goal of sending astronauts to explore a near-Earth asteroid by 2025 —a target set by the Obama administration.

The space agency is developing its own Orion deep space capsule and a giant rocket, called the Space Launch System, to pursue the deep-space exploration program.