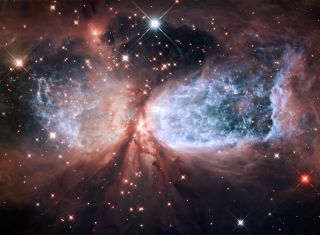 It's snowing in space! Well, not really — but astronomers are calling this colorful nebula a "winter wonderland." With that frosty blue hue and flurries of stars speckled across cosmic clouds, this wintry nebula is simply stunning. Read the full story here.

Two festive nebulas, known together as NGC 248, shine as one in this colorful photo captured the Hubble Space Telescope and released by NASA on Dec. 20, 2016. The data to make the image was recorded by Hubble in 2015, NASA says. Read the full story here.

This image from the Hubble Space Telescope shows Sh 2-106, or S106 for short. This is a compact star forming region in the constellation Cygnus (The Swan). The image was released on Dec. 15, 2011.

In this image, captured by NASA's WISE space telescope, the star-forming nebula Barnard 3 looks like a Christmas wreath. Baby stars are being born throughout the dusty region, while the "silver bell" stars are located both in front of, and behind, the nebula.

Saturn's third-largest moon Dione can be seen through the haze of its largest moon, Titan, in this view of the two posing before the planet and its rings from NASA's Cassini spacecraft released on Dec. 22, 2011. The north polar hood can be seen on Titan appearing as a detached layer at the top of the moon here.

Christmas at the Moon

"Earthrise" seen by the Apollo 8 astronauts in December 1968.

The colorful globe of Saturn's largest moon, Titan, passes in front of the planet and its rings in this true color snapshot from NASA's Cassini spacecraft released on Dec. 22, 2011.

The north polar hood can be seen on Titan (3200 miles, 5150 kilometers across) and appears as a detached layer at the top of the moon here. This view looks toward the northern, sunlit side of the rings from just above the ring plane.

Images taken using red, green and blue spectral filters were combined to create this natural color view. The images were obtained with the Cassini spacecraft narrow-angle camera on May 21, 2011 at a distance of approximately 1.4 million miles (2.3 million kilometers) from Titan. Image scale is 9 miles (14 kilometers) per pixel on Titan.

With the holiday season in full swing, a new image from an assembly of telescopes has revealed an unusual cosmic ornament. Data from NASA's Chandra X-ray Observatory and ESA's XMM-Newton were combined to find this young pulsar in the remains of a supernova located in the Small Magellanic Cloud. It is be the first definite time a pulsar, a spinning, ultra-dense star, has been found in a supernova remnant in the SMC, a small satellite galaxy to the Milky Way.

The pulsar, known as SXP 1062, is the bright white source located on the right-hand side of the image in the middle of the diffuse blue emission inside a red shell. The diffuse X-rays and optical shell are both evidence for a supernova remnant surrounding the pulsar. The optical data also displays spectacular formations of gas and dust in a star-forming region on the left side of the image.

Saturn's moon Tethys, with its stark white icy surface, peeps out from behind the larger, hazy, colorful Titan in this Cassini view of the two moons released on Dec. 22, 2011.

The north polar hood can be seen on Titan appearing as a detached layer at the top of the moon here.

This color image of the region known as NGC 2264 — an area of sky that includes the sparkling blue baubles of the Christmas Tree star cluster and the Cone Nebula — was created from data taken by the Wide Field Imager at ESO's La Silla Observatory in Chile. The image shows a region of space about 30 light-years across. This image was released on Dec. 16, 2008.