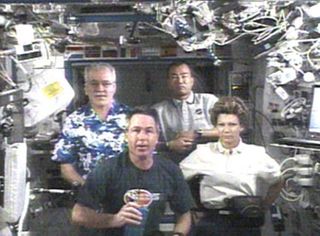 HOUSTON -The astronauts aboard the Discovery orbiter and International Space Station(ISS) are hard at work shifting supplies between the two spacecraft and lookingforward to an extra day in space together.

Discovery'sSTS-114 crew and the station's two Expedition 11 astronauts have a full day ofcargo transfer ahead of them, and are commending what has been a successfulflight.

"Having thespace shuttle back in orbit after a number of years an accomplishment," Discovery'sSTS-114 commander Eileen Collins told Fox News during a series of interviewsfrom space Sunday. "The second thing is getting the International Space Stationresupplied and built, and we're working on that."

Discovery isdelivering about 15 tons of material - which includes the weight of a cargopod - to the ISS, and will return about 13 tons of unneeded equipment andtrash back to Earth. The resupply is vital for the space station, which has notseen a shuttle dock at its ports since NASA grounded its shuttle fleet in 2003after the Columbia disaster.

"We'rereally looking forward to having these guys stay with us an extra day," saidastronaut John Phillips, flight engineer for ISS Expedition 11, told CNN, addingthat the shuttle crew will help stow the cargo the they brought to the station."After we transfer this stuff, it's a little bit of a mess and the more workforcewe have here to help put it away the better."

AfterDiscovery's launch,NASA found evidence of unacceptable foam loss from the orbiter's external tank -the same type of debris shedding that critically wounded the Columbia shuttle -and announcedit would not launch another shuttle mission until the problem was solved.

Columbiawas struck by a 1.67-pound chunk of foam during its 2003 launch that piercedits heat shield and allowed hot gases in during reentry which destroyed theorbiter. During Discovery's July 26 launch Discovery launch, a 0.9-pound pieceof foam fell from a protective ramp, but did not strike the orbiter. However,it was a disappointment to NASA after more than two years of work and $1.4billion to lower risk and increase shuttle flight safety.

The news ofthe falling foam from Discovery's external tank also disappointed the shuttle'screw, but they agreed that halting future flights until the problem isaddressed is a proper course of action.

"We were ofa single mind up here that it was necessary to stop flying until we've fixedthis," STS-114 mission specialist Andrew Thomas told Fox News. "That's what youdo in a situation like this."

Phillipssaid that that he and Expedition 11 commander Sergei Krikalev were somewhat disappointedwhen they heard the news of a potential delay in shuttle flights. The ISS crewanticipated the Atlantis orbiter and its STS-121 crew to deliver twice as muchscience equipment to the space station, as well as a third crewmember -European Space Agency astronaut ThomasReiter - which would return the station to its full, three-person crew.

"But we'restill on track, maybe a little but slower, to resume construction of thestation," Phillips told CNN.

To preparefor a potentially extended period between the STS-114 crew's arrival and thenext shuttle delivery,ISS and shuttle astronauts will spend their extraday together transferring surplus items, such as like laptop computers,tools, pens, paper, printers and about 20 gallons of water, from Discovery andinto the orbital laboratory.

There arealso some components inside the Raffaello cargo pod, known as a Multi-PurposeLogistics Module (MPLM) that could be pulled out and pressed into work aboardthe space station.

"There area bunch of lights from the MPLM we could use," Phillips said.

Latertoday, Thomas and STS-114 mission specialists Stephen Robinson and SoichiNoguchi will go over plans for the second of three spacewalks planned for theirmission. That spacewalk,set to begin at 4:14 a.m. EDT (0814 GMT) on Aug. 1, is targeted at replacing anattitude control moment gyroscope that failed on the space station in 2002.Noguchi and Robinson completed their first spacewalk on July 30, testing out apair of heat shield repair methods for future shuttle flights and performing aseries of other ISS maintenance tasks.

Despitetheir busy schedule, Discovery's crew does anticipate their return to Earth onAug. 8, when they are scheduled to land at Kennedy Space Center in CapeCanaveral, Florida.