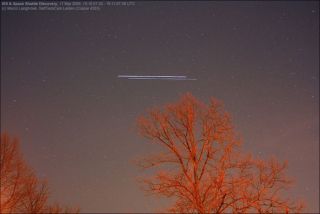 Another view of NASA's space shuttle Discovery and the International Space Station as they streak across the sky in this time-lapsed image as they fly over Leiden, The Netherlands, just before the two spacecraft docked on March 17, 2009 during the STS-119 mission. The shuttle is the object slightly fainter and lower in the sky. Movement is from right to left.
(Image: © Marco Langbroek)

Skywatchers who are south of the equator will have several fine opportunities in the coming days to spot Atlantis, NASA's last space shuttle in operation, sailing across the night sky with the International Space Station.

In the United States, however, only a glimpse will be available, and only in far-south cities such as San Diego, after the two orbiting spacecraft have separated.

Atlantis is currently docked at the space station, with the two linked spaceships appearing as a single, bright moving "star" to observers on Earth.

Much of the United States, as well as Canada and Europe, will be unable to make out the sight of Atlantis and the space station because they will be passing overhead during the daylight hours.  [Photos of Space Shuttles and Station From Earth]

Toward the end of Atlantis' 13-day mission, both the space station and the orbiter may be glimpsed from Hawaii and the far-southern United States.

In contrast, observers south of the equator have a number of opportunities to see the two space vehicles both during the pre-dawn hours and after sunset, with the shuttle and station moving across the twilight sky.

How bright the space shuttle?

Most satellites become visible only when they are in sunlight and the observer is in deep twilight or darkness. This usually means shortly after dusk or before dawn. Because of its size and configuration of highly reflective solar panels, the International Space Station is by far the brightest man-made object currently in orbit around the Earth. [Stunning Photos: Last Shuttle Launch Seen From Above]

On favorable passes, the space station can rival the planet Venus in brilliance and appears more than 25 times brighter than Sirius, the brightest star in the night sky. Some skywatchers even have caught a glimpse of the space station in daylight conditions, just prior to sunset or shortly after sunrise. As a bonus, sunlight glinting directly off the solar panels can sometimes make the space station appear to briefly flare to super-brilliance.

NASA's space shuttles, when flying independently of the space station, almost have matched Sirius in brightness.

From July 10 through 18, with Atlantis docked to the space station, the two space vehicles will appear as one as they pass across the sky.  However, after they undock early on July 19, they will appear as separate objects during the final two days of the mission.

Initially, only the Southern Hemisphere will have opportunities to see Atlantis docked at the space station.

From Johannesburg and Rio de Janeiro there will be evening passes through July 18. Sydney and Melbourne, Australia, will have chances in the evenings from July 16 through 20.

But near the end of the 13-day mission, and after they have undocked, Atlantis and the space station will become visible to some regions north of the equator, streaking separately across the dawn twilight.

The two spacecraft will be flying closely in tandem on the morning of July 18. They will be noticeably farther apart, with Atlantis appearing to "lead" the space station across the sky, on the mornings of July 19 and 20.

Honolulu will have viewing opportunities July 18 and 19, while Mexico City, Miami and Key West, Fla., will get chances to spot the shuttle and station July 19.

Since NASA has extended the space shuttles' final STS-135 mission (which was originally 12 days long) by one day, other southern locations such as Brownsville, Texas, and San Diego will get an opportunity to see the space station and Atlantis on the morning of July 20.

So what is the viewing schedule for your particular hometown? You can easily find out by visiting one of these three websites:

Each will ask for your ZIP code or city and respond with a list of suggested spotting times. Predictions computed a few days ahead of time are usually accurate within a few minutes. However, they can change due to the slow decay of the space station's orbit and periodic reboosts to higher altitudes. Check frequently for updates.

Another great site is this one, which provides real-time satellite tracking and shows you at any given moment of day or night over what part of the Earth the space station or shuttle happens to be.

If you snap an amazing photo of the shuttle Atlantis docked at the space station or flying free and would like to share the image with SPACE.com for a possible story or image gallery, please contact Managing Editor Tariq Malik at: tmalik@space.com.