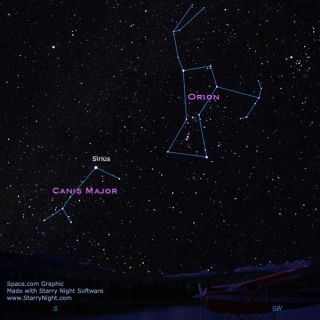 As seen from midnorthern latitudes, Sirius can be found almost due south on spring evenings. Use Orion's belt stars as a pointer to find his dog.

An increasingly bright gibbous moon will obscure many of thedimmer stars in our sky during this week, but certainly not Sirius, the DogStar, the brightest star in the night sky.

Many astronomy books suggest you can locate Sirius by usingthe belt of Orion; that the belt points southeast directly toward Sirius.That's absolutely true, although all anyone needs to do is simply cast a glancetoward the southern sky these cold late winter evenings after it gets dark andyou'll immediately see Sirius. It will be due south between 7:30 and 8 p.m.local daylight time all of this week, and won't set in the southwest untilaround 1 a.m.

Sirius is the brighteststar of the constellation Canis Major, the"Greater Dog," in Latin. According to Burnham's Celestial Handbookother names for it include "The Sparkling One" or "The ScorchingOne."

This star appears a brilliant white with a tinge of blue,but when the air is unsteady, or when it is low to the horizon it seems toflicker and splinter with all the colors of the rainbow. At a distance of just8.7 light years — just over 50 trillion miles — Sirius is the fifth-nearest knownstar. Among the naked-eye stars, it is the nearest of all, with the soleexception of AlphaCentauri. This also explains why the Dog Star is one of handful of starsthat seemed to have shifted in relation to their neighbor stars since peoplefirst started making records of the sky: its direction in the sky changes asmuch as the apparent width of the full moon over a span of 1,500-years.

Friedrich WilhelmBessel (1784-1846) was a German mathematician and astronomer, who went on toobtain precise positional measurements of Sirius. His observations revealedthat Sirius was slowly moving in a wiggly line across the sky. In 1844, Besselhad a sufficient number of precise observations to announce that Sirius musthave an unseen companion. The orbital period of the two stars around each otherturned out to be about fifty years.

In 1862, Alvan G. Clark (1832-1897) became the first to sight Sirius B,also known as "the Pup," the traveling companion star responsible forthe wiggle. Sirius B is only one ten-thousandth as bright as Sirius A, but by1914, spectroscopic observations had demonstrated that its temperature wasabout the same. From physical laws it follows that B emits the same amount oflight per unit surface area as A, therefore to be so dim it must be very small.

Later calculations have shown that A has just over twice themass as our sun, but B has nearly one solar mass. Since it is so small, B mustbe exceedingly dense. In fact, it packs 98 percent of one solar mass into abody just 2 percent of the sun's diameter. To do that, Sirius B must have adensity 90,000 times that of the sun.

A teaspoon of this star material would weigh about 2 tons.

Everyone talks about "dog days" but few know whatthe expression means. Some will say that it signifies hot sultry days "notfit for a dog"; others say it's the weather in which dogs go mad.

But the dog days are defined as the period from July 3 throughAug. 11 when the Dog Star, Sirius, rises in conjunction (or nearly so) with thesun. As a result, some felt that the combination of the brightest luminary ofthe day (the sun) and the brightest star of night (Sirius) was responsible forthe extreme heat that is experienced during the middle of the summertime. Othereffects, according to the ancients, were droughts, plagues and madness.

A more sensible view was put forward by the astronomer Geminus around 70 B.C. He wrote: "It is generallybelieved that Sirius produces the heat of the Dog Days, but this is an error,for the star merely marks a season of the year when the sun's heat is thegreatest."

Star of the Nile

In ancientEgypt, the New Year began with the return of Sirius. It was, in fact, the"Nile Star" or the "Star of Isis" of the early Egyptians.

Interestingly, some 5000 years ago, this"heliacal rising" (appearing to rise just prior to the sun) occurrednot in August, as is the case today, but rather on, or around June 25. Whenthey saw Sirius rising just before the sun, they knew that the "NileDays" were at hand. Its annual reappearance was a warning to people wholived along the Nile River. The star alwaysreturned just before the river rose, and so announced the coming offloodwaters, which would add to the fertility of their lands. People thenopened the gates of canals that irrigated their fields.

Priests, who were the calendar keepers, sighted the firstrising of the Dog Star from their temples.

At the temple of Isis-Hathor at Denderah is a statue of Isis,which is located at the end of an aisle lined by tall columns. A jewel wasplaced in the goddess' forehead. The statue was oriented to the rising ofSirius, so that the light from the returning Dog Star would fall upon the gem.When the priests saw the light of the star shining upon the gem for the firsttime, they would march from the temple and announce the New Year.

In the temple appears the inscription: "Her majesty Isis shines into the temple on New Year's Day, and shemingles her light with that of her father Ra on the horizon."

Joe Rao serves as an instructorand guest lecturer at New York'sHayden Planetarium. He writes about astronomy for The New York Times and otherpublications, and he is also an on-camera meteorologist for News 12 Westchester, New York.