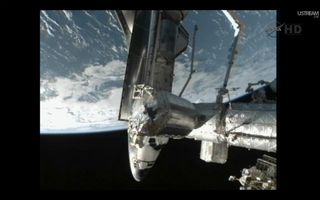 The space shuttle Atlantis is pictured shortly after it docked to the International Space Station for the final time. Atlantis and its four astronauts arrived at the orbiting outpost for one final visit, in what will also be the final time a shuttle is parked at the massive complex.
(Image: © NASA TV)

HOUSTON — The space shuttle Atlantis arrived at the International Space Station today (July 10) for one final visit, a historic connection that marked the last time a shuttle will ever link up with the orbiting lab.

Atlantis docked at the space station at 11:07 a.m. EDT (1507 GMT) after spending two days in an orbital chase that helped the shuttle close in on the massive complex. Shuttle commander Chris Ferguson skillfully backed the orbiter to its destination in a flawless docking that occurred precisely on schedule.

"Atlantis arriving. Welcome to the International Space Station for the last time," station astronaut Ron Garan radioed to the shuttle crew as the two spacecraft sailed over the Pacific Ocean, east of New Zealand.

After some standard leak checks to make sure Atlantis was securely attached to the station's docking port, the hatches between the two spacecraft were opened at 12:47p.m. EDT (1647 GMT) and the shuttle crew entered the orbiting lab. [Photos of NASA's Last Space Shuttle Launch]

This is Atlantis' 12th visit to the orbiting outpost, but the milestone also commemorates the 37th and final time a space shuttle docked to the International Space Station. This mission is the 33rd flight for Atlantis and NASA's 135th flight for the shuttle program, which is retiring this year.

"We have had an absolutely outstanding rendezvous and docking today," shuttle flight director Kwatsi Alibaruho said in a briefing today. "The docking was accomplished with very few issues at all. We're right on schedule."

Last visit is a busy one

During preparations for today's arrival at the space station, Atlantis' astronauts did encounter a slight issue with one of the onboard computers, but mission managers are confident that it was merely a glitch and not a problem with the health of the computer itself. The computer is expected to be reset tomorrow morning and flight controllers will continue to monitor its performance.

"It just represented a loss of redundancy, but we had absolutely no other problems with the spacecraft," Alibaruho said. "We don't think this was a symptom of a real hardware problem. We expect to get this computer to full functionality within a day or so."

The main goal of the shuttle's 12-day mission is to deliver a year's worth of food, equipment and supplies to the space station. Atlantis hauled 9,500 pounds (4,318 kilograms) of cargo into space to help keep the station well-stocked for the years after NASA's shuttle fleet retires. [9 Weird Things That Flew On NASA Shuttles]

Ferguson and his crewmates, pilot Doug Hurley, and mission specialists Sandra Magnus and Rex Walheim, currently plan to remain at the space station until July 18, when they are due to undock Atlantis and head home to Earth.

One spacewalk, which will be performed by station astronauts Fossum and Garan on Tuesday (July 12), will also take place during Atlantis' visit.

The shuttle astronauts spent yesterday conducting a thorough inspection of Atlantis' heat shield tiles to determine whether the orbiter suffered any damage during its launch and ascent into orbit.

Early assessments seem to indicate that Atlantis' heat shield tiles are in good health and the orbiter is performing well so far, said LeRoy Cain, chair of the shuttle's mission management team.

"We don't have any anomalies – no significant issues," Cain told reporters in a news briefing yesterday. "It's been a great start to this mission."

In addition to yesterday's inspection, ground teams here at Johnson Space Center will also use high-resolution photos of Atlantis' belly that were taken as the orbiter closed in on the space station to make their assessment.

Prior to docking to the orbiting outpost, commander Ferguson flew Atlantis through a slow back flip from a distance of about 600 feet (180 meters) below the station. As Atlantis performed this so-called Rendezvous Pitch Maneuver, astronauts on the station snapped hundreds of images of orbiter's belly.

Engineers will continue to assess this data in the coming days to ensure that Atlantis' heat shield is still robust enough to protect it from the scorching temperatures it will face as the vehicle re-enters Earth's atmosphere at the end of the mission.