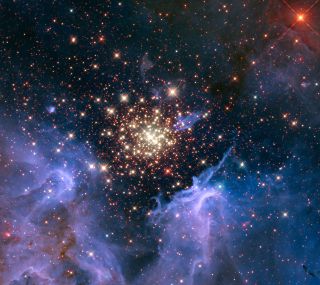 A stealth solar eclipse, a beautiful crater on the moon, a remote volcano eruption and some space fireworks were just some of the few photos we featured this week. Take a look at some of the most striking space photos from the last seven days.

An asteroid the size of a tour bus zipped by Earth today (June 27) in a flyby so close that the space rock was nearer to the planet than some satellites. The asteroid 2011 MD came within 7,500 miles of Earth, but never posed a threat to the planet. [See more Asteroid 2011 MD photos]

In this photo, one of 10 striking images in a SPACE.com countdown this week, the moon is framed between the shuttle Discovery and the Earth during the STS-95 mission in 1998. Here we see the back of the orbiter, with its Orbital Maneuvering System (OMS) engine pod and tail visible, as it passes over the Atlantic Ocean. [a href="http://www.space.com/12139-10-amazing-space-shuttle-photos-countdown.html">See all 10 amazing shuttle photos]

Astronomers this week announced the discovery of neutron star that flared up to 10,000 times its normal brightness, likely because it tried to eat a giant clump of matter. Talk about indigestion. [Read More]

Eritrea's Nabro volcano has been erupting for a week, but few details of the event are known because of the volcano's remoteness. But new satellite photos this week revealed the first detailed look at the volcano's erupting vent and lava flows. [Read More]

When a U.S. Air Force rocket blasted off from NASA's Wallops Flight Facility on Wallops Island, Va., it lit up the late-night sky with a spectacular 11:09 p.m. EDT liftoff.

The moon blocked part of the sun in a partial solar eclipse today (July 1) in an event caught on camera by a European satellite, even though it was largely invisible to everyone on planet Earth. The European Space Agency's Proba-2 satellite snapped views of the eclipse, the third within 30 days, from orbit. [Read More]

This nebula, located 20,000 light-years away in the constellation Carina, contains a central cluster of huge, hot stars called NGC 3603. The Hubble Space Telescope image was captured in August 2009 and December 2009 with the Wide Field Camera 3. [See More Amazing Space Fireworks