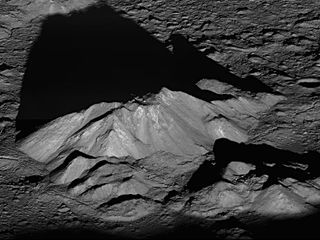 A new photo of the moon's huge Tycho crater taken at sunrise shows haunting dark shadows spreading out across the lunar surface.

The pitch-black patches loom behind the Tycho crater's central peak complex, which is about 9.3 miles (15 km) wide from southeast to northwest.

The photo was taken on June 10 by NASA's Lunar Reconnaissance Orbiter in orbit around the moon. By angling its orbit 65 degrees to the west, the spacecraft was able to capture this dramatic sunrise view. [See the photo of moon's Tycho crater]

NASA launched the LRO mission in June 2009 to photograph the moon in unprecendented detail, mapping its surface for scientific study, as well as to scout potential landing sites for future manned missions.

Tycho crater is named after the 16th century Danish astronomer Tycho Brahe (1546-1601). One of the most prominent features on the near side of the moon, the impact basin is a favorite observing target for amateur astronomers.