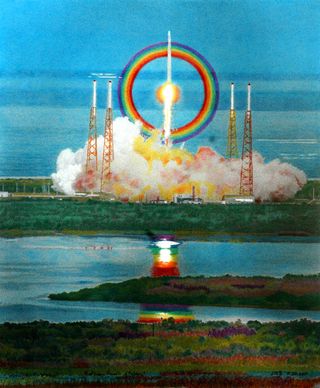 NEW YORK – Lining the back wall of a posh, brightly lit art gallery is a small slice of the country's "Space Coast," right in the middle of Manhattan's artsy Chelsea neighborhood.

The new exhibit, which features the painted work of Florida artist and photojournalist Lloyd Behrendt, captures the sacrifice, glory and future transition of the nation's space program. Behrendt's work is part of the "Melodies of the Moon & the Sky" on display through July 5 at the Amsterdam Whitney Gallery.

Behrendt's sequence of three paintings tells a striking story about NASA and its space program, which is currently undergoing a monumental shift with the retirement of the agency's space shuttles. After 30 years, NASA is retiring the iconic orbiters to focus on exploration missions beyond low-Earth orbit, such as to an asteroid or Mars. [Most Memorable Space Shuttle Missions]

Behrendt, who has photographed hundreds of rocket and shuttle launches from Cape Canaveral since 1996, created his pieces to commemorate the ending of the storied space shuttle era, and to mark the future of the country's space program.

The first painting, called "Sacriflight," depicts the final launch of the shuttle Columbia on Jan. 16, 2003. Columbia broke apart over northeastern Texas as it returned to Earth from its 16-day STS-107 science mission. Seven astronauts were killed in the disaster.

An investigation later found that heat shield damage to Columbia's left wing, which was incurred just after liftoff, was the cause of the disaster on Feb. 1, 2003.

The decision to represent Columbia's fated launch was an attempt "to represent the accomplishments of the STS program and to memorialize the precious sacrifices of those lost over the years as we have explored the harsh and sometimes unforgiving environment of space," Behrendt told SPACE.com.

The second piece, titled "Handoff," captures the landing of the shuttle Atlantis at NASA's Kennedy Space Center to conclude its STS-132 mission. Initially, the STS-132 flight was scheduled to be the last for Atlantis, but in February, NASA announced that it would fly Atlantis on its STS-135 mission to round out the shuttle program.

"I had already begun this work thinking at the time the piece was the last landing of Atlantis," Behrendt said. "Then fate stepped in and gave Atlantis the last-ever flight on STS-135, and then a permanent return to KSC afterwards. The show kind of built itself out of current events."

To represent the future, Behrendt illustrated the maiden launch of SpaceX's commercial Falcon 9 rocket. The Hawthorne, Calif.-based company is one of several firms hoping to provide commercial services to NASA following the end of the shuttle program.

SpaceX and the rise of private spaceflight

Behrendt's third piece, called "Sword from the Stone," forms the cornerstone of his showing, and was created from a photo he took of the historic launch from the top of the Vehicle Assembly Building at the Kennedy Space Center. From this perspective, his camera captured an unusual atmospheric "halo" around the rocket just after liftoff. It was something, "that no one else seems to have picked up, but my film did," Behrendt said.

The Falcon 9 piece, which took Behrendt two months to create, is also a nod to SpaceX's trailblazing CEO, Elon Musk.

"He is not afraid to shake things up, he is a doer, and, for the first time in many years, he has begun to change the way we build and launch rockets," Behrendt said.

Coincidentally, the Amsterdam Whitney Gallery is located in the same building, but several floors above, the showroom for electric carmaker Tesla Motors, of which Musk is also the CEO.

"I'd like to think it was fate," Behrendt said with a smile.

The depictions of the launches are black and white silver prints, colored with transparent oil paints. Also on display is Behrendt's "Study for Falcon 9," which was used to create the larger Falcon 9 piece, and which highlights the unique halo feature.

“These extraordinary historical space images are arresting and possess a depth and drama that is quite unique,” Ruthie Tucker, executive director and curator of the Amsterdam Whitney Gallery, said in a statement. “They speak directly to the mind's eye, creating an unforgettable impression as he records for posterity humanity's steps to reach the stars."

At its heart, Behrendt's showing celebrates the accomplishments of the American space program and the artist's own passion for the industry he grew up around.

“A great many advances we take for granted today have come from the nation's space program, and the work at the Cape that the launch and support teams have performed is some of the most amazing work ever achieved by mankind in a peaceful effort," Behrendt said. “I have been blessed to be a witness to it, and I am humbled to have such an amazing platform from which to share what I have seen.”