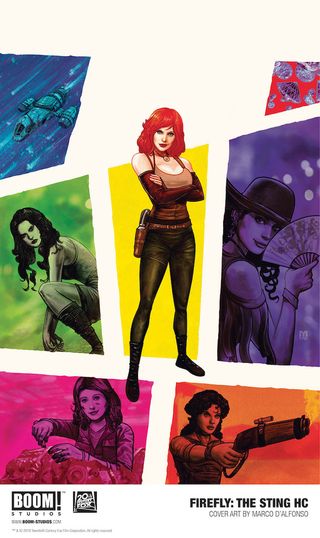 Hold on to your gorram butts, there's a new adventure coming for the "Firefly" crew of Serenity.

Boom! Studios and 20th Century Fox Consumer Products will release a new graphic novel set in the "Firefly" universe of Joss Whedon's science fiction TV series this fall. Dubbed "Firefly: The Sting," the book promises to be a caper to remember.

"Saffron — the enigmatic rogue who captured the hearts of Firefly fans worldwide, as well as the heart of Captain Malcolm Reynolds — returns to the Serenity. But this time, she's got no time for Mal, as she's there to recruit the women of the ship to join her on a heist that has personal stakes for all involved. The cunning grifter joins forces with Zoë, Inara, Kaylee, and River to pull off the greatest theft in all the 'verse! What could possibly go wrong?"

What could possibly go wrong, indeed?

"I've been a 'Firefly' fan since I saw 'Serenity' in the theater in 2005 and rushed out to buy the DVD set that night, and it's been a pure joy cracking open each of these unique, powerful women to see what she desires, what she fears, and how far her loyalty to Mal can stretch," Dawson said in a statement.  "Have you ever wondered what Zoë, Kaylee, Inara, and River would do without a single man in the picture? Thanks to Saffron's wiles (and threats), you're about to find out."

If you're new to the "Firefly" franchise, it's set 500 years in the future and follows the crew of Serenity, a small Firefly-class cargo ship led by Captain Malcom Reynolds. The crew takes odd transport jobs (some legal, some not so much) in a solar system dominated by an totalitarian Alliance, and just tries to get by. The franchise has spawned a feature film ("Serenity"), books, games, comics and has even been launched into space. (Astronauts have a box set of the show on the International Space Station.)

"The galaxy is definitely not ready for the combined powers of all the 'Firefly' women. 'The Sting' brings fans' favorite butt-kicking heroes and foes together in an exciting, never-before-seen combination where everyone's looking for a big score but for very different reasons," said Chris Rosa, Editor, Boom! Studios. "Delilah, Pius, and Rodrigo bring the adventure and thrills of an intricately planned heist to life with this mix of beloved characters and larger-than-life action."

"Firefly: The Sting" will be available Nov. 13, and hit comic book store shelves Nov. 19.  It will also be available as a digital copy from comiXology, iBooks, Google Play, and the Boom! Studios app and other content providers.