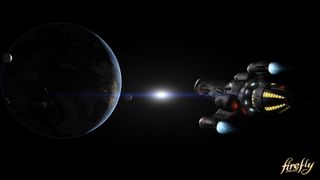 NEW YORK — A new role-playing game aiming to bring fans of the science fiction TV series "Firefly" back into the space western universe is counting down to a big launch in 2015, nearly 12 years after the show went off the air.

Quantum Mechanix (QMx) and Spark Plug Games will launch "Firefly Online" next year and showed off the"Firefly Online Cortex" — a portal users can access to set up an identity in the game before it event begins — Thursday (Oct. 9) during a panel here at New York Comic Con. They also unveiled the first glimpse of how "Firefly Online" will look in a gameplay sneak peak.

"As future citizens of this vast solar frontier, you are entitled to set yourself up on the Cortex, free of charge,"  QMx representatives wrote in a description of the Cortex online. "The Cortex is the interplanetary communications network that will allow you access to all kinds of helpful advice, to trade your goods (legit and otherwise), and find whatever employ that's suitable for someone of your … reputation."

"Firefly Online" allows each player to act as the captain of a ship, making decisions and hiring a crew. Within the context of the game, the recruited crews actually "remember" the way the captain treats them, and based on that information, they might be more or less willing to cooperate with future commands.

The minds behind "Firefly Online" also managed to get all of the actors from the Joss Whedon TV show to come back and lend their voices to the game. Mal (played by Nathan Fillion) and Inara (played by Morena Baccarin) even have a love story in the game, like they did in the TV show.

The game's creators are also going to roll out a series of interviews with the cast on their memories of "Firefly" and their thoughts on the new game. The panel previewed Baccarin's interview for the Comic Con crowd.

"When I was first offered the part, I was just ecstatic to be working on a series that Joss Whedon was involved in," Baccarin said during her interview. "That was the thing that attracted me to the project.

"I remember the feeling of loving everybody and having so much fun and constantly laughing," Baccarin added of her memories on set. "We were always goofing around and playing practical jokes on each other. I remember things here and there, but it's mostly just the general sense of loving the experience."

"Firefly Online" is set for release in Spring 2015. To learn more about the game, visit: https://keepflying.com.