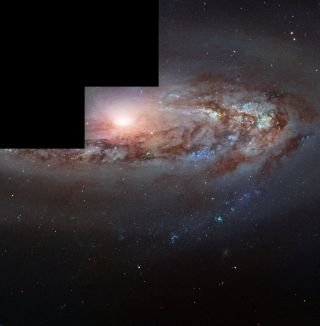 A view of the galaxy Messier 90 from the Hubble Space Telescope. This galaxy is about 60 million light-years from the Milky Way, but it's moving closer
(Image: © ESA/Hubble & NASA, W. Sargent et al)

A gorgeous new photo from the Hubble Space Telescope depicts Messier 90, a spiral galaxy roughly 60 million light-years away from our own Milky Way — but getting closer.

While the image itself is incredible, even more fascinating is the information astronomers discovered while capturing it. Messier 90 is one of very few galaxies moving toward the Milky Way, according to a statement from Hubble. Scientists are able to tell that the galaxy is coming closer to us because of the light coming from Messier 90.

"The galaxy is compressing the wavelength of its light as it moves towards us, like a slinky being squashed when you push on one end," Hubble representatives said in the statement. On the visible light spectrum, shorter wavelengths appear blue. So, because its light is compressed from our perspective, Messier 90 exhibits a phenomenon called "blueshift," which indicates to scientists that Messier 90 is moving closer to us.

Almost all other galaxies we can observe are moving away from us with the expansion of the universe, according to the Hubble statement. We see their light stretched toward the red end of the visible light spectrum (called redshift).

Messier 90 is part of the Virgo Cluster, a group of more than 1,200 galaxies. Astronomers have said that Messier 90's blueshift is likely due to the cluster's incredible mass, which accelerates the galaxies within the cluster to high velocities and sends them on bizarre orbits. The galaxies' odd paths send them both towards and away from us over time, according to the Hubble statement.

The Virgo Cluster itself is moving away from us, a Hubble representatives said in the statement, but some of the galaxies within the cluster, including Messier 90, are moving faster than the cluster as a whole. So, from the perspective of Earth, we see the galaxy moving toward us, even though other galaxies in the same cluster appear to be moving away from us at high velocities.

This particular Hubble image of Messier 90 combines infrared, ultraviolet and visible light. Because the camera used to take the image was made up of four light detectors with overlapping fields of view — one with higher magnification than the other three — the image is laid out with a staircase-shaped hole at the top.

You can see more Hubble images of Messier objects, all discovered by astronomer Charles Messier, here.