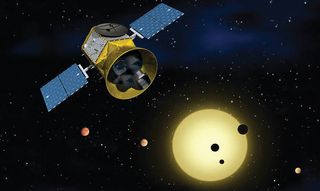 NASA's TESS mission was designed to identify exoplanets, but that's no reason not to use its data to better understand stars as well.
(Image: © MIT)

In order to study planets, you have to look at stars, so you may as well analyze what you see.

Astrophysicists are doing just that with the data gathered by NASA's Transiting Exoplanet Survey Satellite (TESS). That spacecraft has spent a year and a half staring at bright, nearby stars, looking for the blips in brightness that can reveal alien worlds. But these dips can also represent different types of stellar hiccups, which means that TESS data is also a treasure trove for scientists studying how stars work.

"Really, TESS has been secretly all along a stellar activity and stellar variability mission," James Davenport, an astronomer at the University of Washington, said last month during the 235th meeting of the American Astronomical Society, held in Honolulu.

"There's so many cool, wiggly things here," Davenport said of a collection of light curves from the first year of TESS observations.

Some of those cool, wiggly things are individual stars. A host of stellar features can cause light curves to act up. Flares are unpredictable bursts that cause spikes in a star's light curve. Stars rotate, so when a dark sunspot develops, it drifts across the face of the star as seen by TESS, causing the light curve to periodically dip. That rhythm lets scientists calculate how quickly the star is spinning, and perhaps its age.

Other light curves represent pairs of stars that twirl around each other. If that dance happens at a convenient angle compared to TESS's orientation, making it an eclipsing binary, the spacecraft can measure the difference in total light as it sees first two stars, then one, then both again.

That said, these dances look inconveniently similar to the TESS mission's other type of target, exoplanets. "There are so many eclipsing binaries, and I know this is particularly the bane of the other half of the TESS mission," Davenport said. "These things tend to show up as looking like really big planets, but they're amazing."

For both rotating stars and eclipsing binaries, TESS's surveying work could help scientists find a whole lot more of these types of stellar spectacles. But astrophysicists turning to TESS data are limited by the same mission constraint that lets the spacecraft study so many different stars: Every four weeks or so, the spacecraft pivots, studying a new stretch of the sky.

Such a pattern means that TESS can't really identify something like our sun, which takes 25 days to rotate, as an object of astrophysical interest. The slow-paced objects it can study are those conveniently located where TESS's imagery bands overlap, at the poles. Here, the spacecraft can study stars for months on end, potentially illuminating even more languid stars.

"I think TESS is arguably as impactful for stars as it is for exoplanets," Davenport said. "TESS is going to change what we know about nearby bright stars in our galaxy."