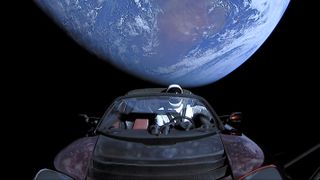 An electric car is just one of the many unusual objects that have left the confines of Earth.
(Image: © SpaceX)

Humankind has been fascinated with space for our entire existence, and it seems as soon as we could start sending things up there — be it animal, toy or food — we did. Here's a list of some of the more bizarre things humans have launched into space.

Other creatures of Earth

All About Space magazine takes you on an awe-inspiring journey through our solar system and beyond, from the amazing technology and spacecraft that enables humanity to venture into orbit, to the complexities of space science.

Save up to 56% with our latest magazine deal.VIEW DEAL ON All About Space

The first animal sent to space was Laika, the Soviet dog. Laika was whisked from the streets of Moscow and became the first animal to orbit Earth with the launch of Sputnik 2 on Nov. 3, 1957. Unfortunately, Laika did not survive the spaceflight.

Ham is another popular character in animal spaceflight as he was the first chimpanzee to be launched into space, by the United States in 1961, three months before Alan Shepard's trailblazing flight. Ham was trained to perform tasks during the spaceflight, and became the first animal to interact with a spacecraft rather just riding in it.

When humans made the journey into space, it wasn't long before music followed. The first instance was a Christmas-themed prank aboard NASA's Gemini 6A spacecraft conducted by astronauts Walter M. Schirra, Jr. and Thomas P. Stafford.

"We have an object, looks like a satellite going from north to south, probably in polar orbit. Looks like he might be going to re-enter soon," reported Schirra on Dec. 16, 1965. "I see a command module and eight smaller modules in front. The pilot of the command module is wearing a red suit." After reporting this to teams on the ground Schirra broke out into "Jingle Bells", on his tiny, four-hole, eight-note Hohner Little Lady harmonica, with Stafford accompanying him on five small bells.

This prank by Schirra and Stafford was the first recorded instance of musical instruments played in space. The harmonica and bells are now on display at the Smithsonian National Air and Space Museum in Washington, D.C.

In the 1970s, famous astronomer Carl Sagan's opinion carried a lot of weight when it came to the construction and implementation of deep-space exploration missions. Sagan held the view that if these spacecraft were to be picked up along the way by an extraterrestrial intelligent life form, how would they know it was from Earth?

This line of questioning is what led to the famous Voyager Golden Records. NASA's Voyager 1 and 2 were launched in 1977, only 16 days apart, and they sent back remarkable pictures of our solar system. Before launching the twin spacecraft, Sagan and his committee created and fitted a 12-inch (30 centimeter) golden record to each one, with instructions on how to play it.

The records include 115 images in analog form, greetings spoken in 55 languages followed by the "sounds of Earth" and a 90-minute selection of music throughout the ages from around the world.

In 2001, Pizza Hut became the first company to make a delivery into space when, through an odd turn of events, they struck a deal with the Russian space agency Roscosmos to have a pizza delivered to the International Space Station (ISS). The delivery was reportedly worth $1 million at the time. Russian cosmonaut Yuri Usachov was the lucky recipient and enjoyed the Earthly comforts as he posed for the cameras with a big thumbs up.

This pizza was tweaked slightly to undergo this unusual delivery. Salami was used instead of pepperoni, as pepperoni did not withstand the 60-day testing process, and extra salt and spices were used in order to tingle the taste buds that are depleted in microgravity.

Space is teeming with dangers that could potentially kill anyone who ventures there. But if you're already dead, what do you have to lose, right? This may seem peculiar, but it has been the last wish of certain people who feel a strong affinity with the night sky and space to have their remains launched into space — a space burial.

The first occurrence of this was in 1992 with Gene Roddenberry, creator of the original "Star Trek" television series. In Roddenberry's will, he requested that his remains boldly go where no one has gone before. So, a portion of his ashes was launched from Earth on the space shuttle Columbia for the STS-52 mission.

Another famous example is Clyde Tombaugh, the American astronomer who discovered Pluto in 1930. Tombaugh's ashes are onboard NASA's New Horizons mission, which was shot at insanely high speeds towards the distant dwarf planet in 2006.

"Star Wars" has inspired generations of sci-fi fandom, still present and popular today. This series of space adventures, where the heroes travel at light speed and visit endless worlds, has inspired many to delve into the world of astronomy and space exploration.

The lightsaber that Luke Skywalker (played by actor Mark Hammill) wielded in the 1983 film "Episode VI: Return of the Jedi" was flown into space and back in 2007. The lightsaber flew with a team of seven astronauts who were jettisoned into space to deliver and assemble the Harmony module, also known as Node 2.

"NASA has a long-standing partnership with the Lego company," Scott Bolton, principal investigator for the Juno mission, said at a press conference right before the launch. "Any of you that have children know that Legos are very popular with kids, as well as really helping to teach them about building and engineering."

NASA's Juno spacecraft was launched on Aug. 5, 2011, and along with a well-tuned instrumental suite capable of probing the enormous gas giant Jupiter, there were three Lego mini-figurines – Roman god Jupiter, the spacecraft's namesake; Jupiter's wife, Juno and Galileo Galilei, who made several important discoveries about Jupiter.

This trio was placed on the Juno spacecraft as part of the "Bricks in Space" project — an outreach program between the Lego Group and NASA to inspire children's interest in STEM-related subjects.

Starman heading for the stars, man

On Feb. 6, 2018, SpaceX performed an extravagant launch of the Tesla Roadster and Starman — SpaceX's spacesuit-clad mannequin driver. Both Tesla and SpaceX are owned by Elon Musk, and he and his team thought that this car delivery would be an appropriate way to commemorate the maiden launch of the Falcon Heavy rocket.

SpaceX shared a live stream from within the car as it floated through space. The words "Don't Panic!" could be seen on a screen next to the steering wheel. Musk said that the car's stereo would be blaring David Bowie's "Life on Mars" on repeat as it traveled through space. And in space it will remain, at least for the foreseeable future — the car is in orbit around the sun which crosses the orbit of Mars before overlapping with Earth's orbit for a bit. Models predict the car will crash into Venus or Earth a few tens of millions of years from now.