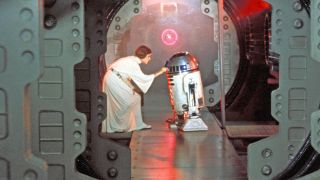 Movie-goers didn't know what was waiting for them when "Star Wars" first opened in theaters on May 25, 1977.

This Western in space showed dogfighting spacecraft, vehicles traveling at hyperspeed, and an array of colorful characters — even aliens — all locked in the classic battle of good and evil. In an era long before frequent fan conventions and ever-present social media, the catchphrases still spread quickly: "May the Force be with you." "We're doomed!" "Help me, Obi-Wan Kenobi, you're my only hope."

"I was totally blown away by a movie, like I had never imagined," Elizabeth Holm, who was 12 years old when the film came out and grew up to be a materials scientist at Carnegie Mellon University, told Space.com. "I knew nothing about what I was about to see. I was the perfect age and at the perfect stage of preparation, which was zero."

Related: The Greatest 'Star Wars' Villains of All Time

Now it's been 42 years and — incredibly — nearly a dozen Hollywood films later, if you include two recent stand-alone films. The latest edition, "The Rise of Skywalker," opened in theaters nationwide yesterday (Dec. 19). "Star Wars" remains a blockbuster under the Disney brand, which recently premiered the episodic "The Mandalorian" as its headliner on the new Disney Plus streaming service.

What is it about this franchise that gives it staying power throughout a generation and a half of change? What keeps it going as the children and grandchildren of the original viewers stream shows instead of tuning in their televisions and as the internet has become a stronger force (pun intended) in our lives? Two professors say it all comes down to a hidden secret of "Star Wars": adeptly using classic themes that run through thousands of years of history.

"That's what 'Star Wars' is about: being great"

Holm's childhood fascination first centered on the technological: "I remember my mind being blown by the skimmer, the vehicle that Luke rides to go into town with the robots," she said of the first film. She was curious about how it functioned — air? hypergravity? And above all, she said, it showed her that the "Star Wars" universe was situated in an utterly different place.

A generation later, Holm's daughter was similarly fascinated by the "Harry Potter" franchise, which tells the adventures of witches and wizards in training. "It's about magic, of course, not science, but it got me thinking about the connection [with 'Star Wars']," Holm said. "It never explains the science at all. Lightsabers? Light doesn't work like that. It's about magic and wishes fulfilling everything."

To Holm, "Star Wars" is the perfect example of that famous Arthur C. Clarke quote about sufficiently advanced technology being indistinguishable from magic: The technology is magic to children. Heck, the Force appears to work like magic, despite the prequels' attempts to explain what was going on at the molecular level. Our modern society is also developing new "magical" types of technology, such as self-driving cars and machine learning, the latter of which Holm works with in her job.

"The outcome, we hope, enables us to do great things," Holm said. "That's what 'Star Wars' is about: being great. Saving the universe. Saving people from evil. Triumphing. Being a member of a team that does things that are important to the universe."

Holm has also professionally pondered "Star Wars." In May 2005, The Journal of The Minerals, Metals & Materials Society published member submissions about the franchise to mark the theater release of "Revenge of the Sith."

Holm and her then-husband, both government employees at the time, contributed a "memo" about the Death Star from an Empire government worker's perspective. They wrote in the typically stilted style of civil servants, Holm said, and even threw in a reference to NASA's "Faster, Better, Cheaper" program for planetary probes in the 1990s.

"As you are aware, the current working design for the 'Death Star' excess planetary removal device (PRD) differs substantially from the original engineering concept," they wrote. "Working under the Faster, Better, Cheaper paradigm, our engineers suggested that the optimal PRD harnesses a pre-existing asteroid or moonlet, accelerates it to near light speed (NLS) and collides it with the planet in question. This design was lauded for its all-natural approach to planetary removal."

Related: The Best 'Star Wars' Gift Ideas for the Holidays

"Star Wars" creator George Lucas was famously inspired by the book "The Hero with a Thousand Faces" by Joseph Campbell (Pantheon Books, 1949). The book's basic premise is that mythological tales from all around the world draw on similar themes, suggesting that humans have some sort of universal culture.

While feminist scholars today protest some of the book's anti-women conclusions, Campbell's work remains influential for suggesting themes like the "hero's journey." The book posits that a protagonist grows in a story through conflict and by going through magical experiences, like going into the underworld or meeting magical beings. These themes go back to very old tales, including Mesopotamia's "The Epic of Gilgamesh" and the ancient Greek works of Homer, especially "The Odyssey."

The character of Luke Skywalker was supposed to undergo his own "hero's journey" in the original "Star Wars." Lucas drew on themes of good and evil drawn from ancient texts such as the Biblical Old and New Testaments, and Sophocles' "Oedipus Rex" play trilogy from ancient Greece, Lisa Yaszek, professor of science-fiction studies at Georgia Tech University, told Space.com. Additionally, Lucas made sure to throw in themes that would resonate with 1970s and 1980s audiences, including strong characters who were female, or people of color.

Take, for example, the famous scene in the original film where Leia takes over during a bungled "rescue" by Han Solo and Luke Skywalker. "It was the first time a science fiction heroine picked up a gun and saved herself," Yaszek said. "She says, 'Oh dude, you're too short and completely inadequate. I'm going to take care of it.' And that's great."

The franchise draws on numerous other strategies to bring in fans, Yaszek said. It crosses between multiple types of media; Yaszek's son enjoys "Star Wars" games as well as the films, for example. The franchise also appeals to people beyond the science-fiction fandom with diverse Hollywood elements like the "bromance," slapstick comedy and screwball romance.

The series also evolves with its audience. Yaszek calls all the core "Star Wars" films "meditations on war and contemporary warfare," but the type of war is very different between the Vietnam era of the 1970s films and the guerrilla war of the post-9/11 world shown in the newest films.

For Yaszek, who first saw the 1977 film at the age of seven, one of her favorite things is seeing people of many cultures and backgrounds embracing the franchise and putting their own slants on it. She once attended a black science-fiction conference and was struck by a woman in a stunning black-and-white ballgown. Yaszek was so entranced with the design that she asked about the dress' origin story.

"It started out as a Stormtrooper," the woman told Yaszek. "Then I asked myself, 'Why as a black woman would I ever want to be a Stormtrooper?' So I turned it into a ball gown."

To Yaszek, that conversation showed that "people can find places for themselves," taking the meaning that they want from the franchise and applying it to their own lives.