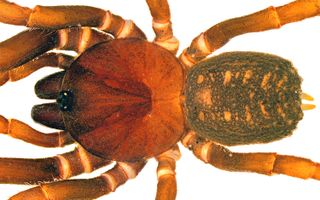 White-armored Stormtroopers in the "Star Wars" movies are practically identical and nearly impossible to tell apart. That uncanny similarity recently inspired a team of scientists who had discovered a new spider genus; the arachnids were so alike each other in size and markings that the researchers named them after the helmeted troops, calling the creatures Stormtropis.

These eight-legged Stormtroopers belong to a family dubbed bald-legged spiders, which are native to South America and Central America.

Like the Stormtroopers, the spiders "are very similar to each other, with some capacity for camouflage"; the sci-fi soldiers and the newfound spiders are also alike in being somewhat clumsy, according to the study. However, there is no evidence (yet) that the spiders, like their movie namesakes, are terrible at hitting moving targets with a blaster. [9 Animals with 'Star Wars'-Inspired Names]

Stormtroopers are a common sight across the Empire's conquered worlds in the "Star Wars" universe, and Colombia's bald-legged spiders turned out to be surprisingly numerous, too. Though the arachnids had never been reported in that country before, the study authors described two species in two previously known genera — Paratropis, Anisaspis — and four in the newfound Stormtropis genus. All the newly described species were scattered across a diverse range of habitats in Colombia.

Some of the newfound female spiders unexpectedly demonstrated a previously unknown behavior: digging burrows in soil, the researchers reported.

One Stormtropis species — S. muisca — was collected in the central Andes at an altitude of 11,155 feet (3,400 meters) above sea level, making that creature the highest-dwelling bald-legged spider species confirmed to date, the authors wrote.

However, S. muisca's cousins may live even higher than that. The scientists gathered evidence of other bald-legged spider species living at altitudes as high as 13,123 feet (4,000 m), but that data is yet to be published, according to the study.

The findings were published online today (March 14) in the journal ZooKeys.