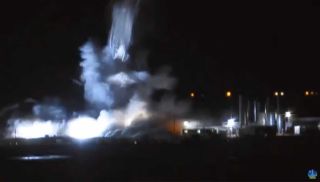 This still from an Spadre.com video shows SpaceX's Starship SN1 booster as it appeared to burst during a pressure test at the company's Boca Chica, Texas test site on Feb. 29, 2020.
(Image: © Spadre.com, via YouTube)

On Friday night (Feb. 28), the second full-size prototype of SpaceX's Mars-colonizing Starship vehicle, a variant known as the SN1, was destroyed during a pressurization test.

SpaceX had been aiming to launch the SN1 on a test mission relatively soon. In late December 2019, Musk said via Twitter that the prototype's first flight, which would stay firmly within Earth's atmosphere, was "hopefully 2 to 3 months away."

"So … how was your night?" read one tweet, which accompanied a video of the prototype's death. This was followed by "It's fine, we’ll just buff it out," and then another tweet that said, "Where’s Flextape when you need it!?"

And in yet another Monday-morning tweet, Musk said that SpaceX has shifted its focus to the next prototype iteration, the SN2, which is already under construction.

"We're stripping SN2 to bare minimum to test the thrust puck to dome weld under pressure, first with water, then at cryo. Hopefully ready to test in a few days," Musk wrote.

We’re stripping SN2 to bare minimum to test the thrust puck to dome weld under pressure, first with water, then at cryo. Hopefully, ready to test in a few days.March 2, 2020

It shouldn't be surprising that Musk isn't more broken up about the SN1; he has stressed, after all, that SpaceX will go through many prototype iterations on its way to an operational Starship. In a tweet on Dec. 27, 2019, for example, Musk explained that "each SN will have at least minor improvements, at least through SN20 or so of Starship V1.0."

And the SN line itself represents a redesign spurred at least in part by a November 2019 pressure-test incident involving SpaceX's first full-size Starship prototype, the Mark 1.

The Starship spacecraft is half of SpaceX's planned Mars-colonizing transportation system, which also includes a huge rocket known as Super Heavy. Both vehicles are designed to be completely and rapidly reusable.

Super Heavy will launch the 100-passenger Starship to orbit, then come back down to Earth for a vertical landing. The 165-foot-tall (50 meters) Starship, meanwhile, will head from Earth orbit to the moon, Mars and other distant destinations. And the spaceship will return to Earth's neighborhood when its journeys afar are done; Starship is powerful enough to launch itself off the surface of the moon and Mars, both of whose gravitational pulls are much weaker than that of Earth, Musk has said.

Musk envisions a fleet of 1,000 Starships departing for Mars once every 26 months, when Earth and the Red Planet align favorably for interplanetary missions. Such flights will eventually help establish a million-person city on Mars, if all goes according to SpaceX's plan.

It's unclear when that ambitious goal may be achieved. But SpaceX plans to get Starship and Super Heavy up and running soon. Company representatives have said that Starship could start launching communications satellites to Earth orbit by 2021.

And SpaceX has one crewed Starship mission on the docket already: Japanese billionaire Yusaku Maezawa booked the vehicle for an around-the-moon flight that's scheduled to launch in 2023.