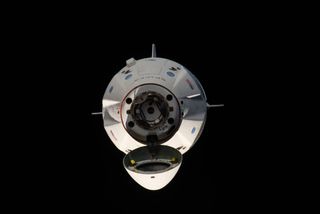 SpaceX's new astronaut taxi will return to Earth tomorrow morning (March 8), but a safe return is no slam dunk.

Indeed, the fast and fiery descent through our planet's atmosphere may be the most difficult part of Demo-1, the Crew Dragon capsule's maiden mission to the International Space Station (ISS), according to SpaceX founder and CEO Elon Musk.

He mentioned Crew Dragon’s parachute system and backshell. Both are relatively unproven; they're quite different from the versions employed by the cargo variant of Dragon, which has flown 16 robotic resupply runs to the ISS for NASA.

For example, the cargo Dragon's backshell is a smooth, conic shape. But Crew Dragon's is asymmetrical, because it has to accommodate the eight SuperDraco escape engines that would get the capsule out of harm's way in the event of a launch emergency.

"That could potentially cause a roll instability on re-entry," Musk said. “I think it’s unlikely; we’ve run simulations a thousand times. But this is a possibility."

Similarly, he added, "Will the parachutes deploy correctly? Will the system guide Dragon 2 to the right location and splash down safely?”

That location is the Atlantic Ocean, not far off the Florida coast. The cargo Dragon comes down in the Pacific, but SpaceX wants to get the crewed variant back to its processing facilities on Florida's Space Coast quickly, company representatives have said.

SpaceX has been developing Crew Dragon under a $2.6 billion NASA contract the company signed in 2014 — a different deal than the one structuring the cargo Dragon's resupply runs. Boeing also signed a NASA commercial-crew contract, getting $4.2 billion to build and fly a capsule called the CST-100 Starliner.

Crewed flight could come soon for both of these spacecraft. SpaceX plans to launch two astronauts to the ISS this July on a test flight called Demo-2, provided Demo-1 ends well and a subsequent uncrewed "abort test" putting those SuperDracos into action goes as planned.

Starliner could launch on its version of Demo-1 as early as next month and fly a crewed demonstration mission to the ISS by August, Boeing representatives have said.