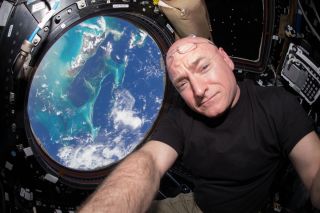 SAN FRANCISCO — NASA will shake things up a bit in low Earth orbit to get ready for the giant leap to Mars.

The agency has viewed the International Space Station (ISS) as a key training ground for trips farther afield since the first astronauts visited the orbiting lab in November 2000. But NASA plans to beef up this role for the station in the near future, treating the ISS more explicitly as a "Mars transit analog" to prep for crewed missions to the Red Planet in the 2030s.

"We really could do much more," Julie Robinson, NASA's chief scientist for the ISS Program, said here Saturday (Nov. 2) at the first Space Health Innovation Conference. "We're ready to do more, because we have 20 years of really good datasets."

Robinson led a multidisciplinary team that recently identified a handful of ISS-use modifications that could help pave NASA's crewed path to the Red Planet. One of these "use cases" is conducting more one-year missions on the orbiting lab.

Crewmembers usually spend about six months aboard the ISS before coming back down to Earth. But that's far shorter than a Mars mission would be; the trip to the Red Planet takes eight to nine months one way with current propulsion technology. So, NASA wants more data about the effects of long-duration spaceflight on the physiological and psychological health of astronauts. (The ISS isn't a perfect Mars analog in this respect, of course; it resides within Earth's protective magnetosphere and is therefore exposed to less-damaging radiation than a Mars-bound craft would be.)

To date, the agency has launched just one yearlong ISS mission, sending Scott Kelly to live on the orbiting lab from March 2015 to March 2016. Russian cosmonaut Mikhail Korniyenko took part in this flight as well, spending 342 days in space, just like Kelly.

NASA has also extended two other astronauts' ISS stays into the "Mars transit" range: Peggy Whitson racked up 289 days of continuous flight in 2016 and 2017, and Christina Koch, who arrived on the orbiting lab in March, is now scheduled to come down in February 2020.

"What we're saying now is we want to really bump that up a notch and add 10 more subjects to that U.S. database," she said.

The ISS Program has approved that plan, which NASA can start implementing once a private astronaut taxi is up and running, Robinson added.

NASA's Commercial Crew Program has funded the development of two such capsules: SpaceX's Crew Dragon and Boeing's CST-100 Starliner. Both could begin flying people next year. But until that happens, NASA will remain dependent on Russian Soyuz spacecraft to get astronauts to and from the orbiting lab. And that poses a planning problem.

"We have to have control of our lifeboat in order to control the crew schedule," Robinson said.

"And we're still working with our Russian colleagues to define if they're going to have some cosmonauts participate as well," she added. "Because that's the strongest [option], is if we have both entities collaborating, like we did with Mikhail and Scott."

The second use case also depends on the availability of a private vehicle — specifically, Starliner. NASA wants to learn more about the capabilities of astronauts "deconditioned" by long-duration spaceflight, to see what they'll be able to do immediately after landing on Mars after their long journey. For example, will they have good enough fine motor skills to swap out power cables on their lander or perform other fiddly tasks if need be?

This is not a silly question. Consider how helpless astronauts seem after returning from ISS missions; they're pulled out of their Soyuz by recovery crews, wrapped in blankets and nestled into comfortable chairs to await thorough medical exams.

And there are logistical concerns to go along with the health issues. For example, previous studies performed with NASA's Mars-architecture team showed that if Red Planet pioneers couldn't be expected to do anything for a week, much more battery power would have to be built into their lander, doubling its mass, Robinson said.

NASA performed a 10-hour sensorimotor test of just-landed ISS crewmembers this past June and would like to do a one- to two-day version with astronauts coming down on Starliner, Robinson said. The Boeing capsule is the choice here because it touches down on terra firma, like the Soyuz (and like a Mars lander), whereas Crew Dragon splashes down in the ocean.

"Landings in the water are really no good as a Mars analog, because you take something that was already pretty bad and you make it horribly worse by bouncing around in the ocean," Robinson said.

If the ISS Program approves this plan, in-depth tests — the nature of which is still being worked out — could theoretically be conducted as soon as 2022, on the third crewed Starliner landing, she added.

Astronauts traveling to Mars won't have access to all the amenities afforded by the ISS, which has about the same internal volume as a 747 jet and is regularly resupplied from the ground. Those off-limits amenities also include real-time advice from ground controllers, given the communications delay caused by the vast distance between a Mars-bound craft and Earth. So, Red Planet pioneers will have to be more self-sufficient, especially when dealing with emergencies.

That brings us to two more use cases: simulating a serious medical issue that crops up during the trip to the Red Planet and imposing a Mars-mission-like time delay on communications with mission control. NASA plans to do a medical simulation on the ISS next spring. The ISS Program has agreed to plan out a two-week comm-delay experiment, Robinson said, and it's possible that longer stints may follow in the future.

The ISS cannot accommodate all potential use cases, however. For example, it would be nice to restrict the available space to 880 cubic feet (25 cubic meters) per crewmember, because that's more or less what a Mars-bound craft is expected to provide, Robinson said. But that modification cannot be made on the tightly packed ISS; there's just no way to move stuff around to get the desired effect.

However, space-restriction experiments could be performed on commercial modules that dock with the ISS in the future, Robinson said, or with free-flying space stations that set up shop in low Earth orbit. Such work might also be done on the Gateway, the small, moon-orbiting outpost that NASA plans to begin building in 2022 as part of the agency's Artemis lunar-exploration program.

And Artemis itself is a steppingstone to Mars, NASA officials have stressed. The agency wants to establish a long-term, sustainable presence on and around the moon by 2028, thereby learning the skills and techniques needed to get astronauts to the Red Planet.