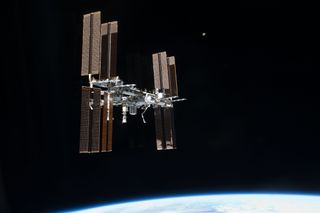 The International Space Station in orbit around Earth.
(Image: © NASA)

NASA is looking for ways to make a visit to the International Space Station a little more like a voyage to Mars.

Of course, nothing can ever truly replicate the experience of a Mars mission before humans embark on that journey for real. But NASA can prepare by mimicking as many different aspects of the trip as possible. So the agency is strategizing ways the space station can host such practice sessions — without interfering with the orbiting lab's other priorities.

"My job is to imagine what a Mars mission would look like: Where would we go, what would we do, and how would we do it?" Michelle Rucker, an engineer at NASA's Exploration Mission Planning Office, said during a panel held at the International Astronautical Congress in Washington last month. "Going to Mars would be difficult, but fortunately, we don't have to start from scratch, because we've already built these other platforms that we can use to practice some of the operations that we would use on a human Mars mission."

Spaceflight professionals call those practice scenarios analog missions. The most striking Mars-analog missions so far are those that isolate crewmembers on Earth, perhaps in an exotic destination. But those analogs can't replicate specific characteristics of spaceflight, and that's why NASA decided to investigate ways that the agency could explicitly use the International Space Station as an analog for Mars missions.

"Every analog has some advantages, and every analog has some disadvantages," Julie Robinson, chief scientist of NASA's International Space Station Program, told Space.com. "It's worth thinking about what does [the space station] match and not match across all the different hazards of human spaceflight."

So NASA asked scientists, engineers and astronauts to consider how they could use time on the space station to better prepare for the long journey to Mars, ignoring the traditional constraints that rule on the orbiting laboratory. A team has been evaluating those possibilities and considering how they could be implemented.

Some aren't very feasible. For example, the team concluded, there's no straightforward way to adjust modules on the space station to mimic the squeeze that would be necessary for a Mars mission. That's better done on Earth.

The space station is also a more dynamic environment than a spacecraft headed to Mars would be, making the orbiting laboratory a poor model for the sort of social constraints Mars-bound astronauts would experience.

"The ISS is huge," Robinson said. "Compared to what I think is a likely Mars transit vehicle, it's a palace, and it has lots of coming and going." Trying to redesign these aspects of the space station as an analog would interfere dramatically with everything else about the space station.

But the team found that other key aspects of the long journey could be replicated onboard the space station. One priority is increasing the number of astronauts who remain in space for longer than the typical six-month stay, since a round-trip voyage to Mars would likely last about three years.

"On ISS, we've done a couple of one-year missions, and those have given us some concern," Robinson said. "We need to have enough crewmembers that have been on ISS for a longer period of time so that we really feel like we understand the variability in human responses to being in microgravity for that period of time."

Two NASA astronauts currently in orbit, Christina Koch and Andrew Morgan, will be spending a little longer than usual in flight. But before the agency can study longer flights in earnest, it needs its commercial crew providers, SpaceX and Boeing, to begin ferrying astronauts to the space station next year.

Time on the space station can also give NASA personnel a better sense of just how accurately they can prepare for a voyage that would take them far out of reach of any resupply missions. Rucker imagines an exercise in which mission staff attempt to plan out everything astronauts need for a specific period of time, then check how well the planning matched real crew needs.

"Was there anything not on the list? Did we forget something that, halfway to Mars, you would've said, 'Oh, we ran out of wet wipes,' or whatever," Rucker said. "It's a very simple thing to do, but if you are halfway to Mars and you're out of a critical item, it's not going to be a good day."

A second category of analogs relying on the space station makes use of returning crewmembers as they reaccustom themselves to dealing with terrestrial gravity. This serves as a model for the amount and type of activity astronauts could perform in their first hours on Mars. "What you can and can't assume the crew can do in the first day is a huge driver of the mass of the mission," Robinson said. That's because more impaired astronauts need more equipment; more equipment increases mission costs.

Right now, returning astronauts touch down in Kazakhstan, where it's difficult to run the types of tests NASA would want. And crewed SpaceX capsules will land in the ocean, where waves will interfere with the transition back to gravity. So for this type of test, NASA will have to wait until Boeing Starliner capsules are making their returns, which will be on land.

A final type of analog scenario involving the ISS is easier to implement, thanks to a recent upgrade to the station's computer facilities. These scenarios tackle the challenges of communication during a Mars mission.

Two such types of challenges face would-be Mars visitors: the sheer amount of time needed to hear back from colleagues on Earth during a time-sensitive situation and the occasional communications blackout, which would last up to two weeks. The latter is trickier to mimic on the space station, but practices that NASA already uses to prepare for spacewalks could become the basis for Mars blackout procedures, Robinson said.

And a recent computer update means that NASA can now implement a virtual communications lag that will allow everyone involved in a mission to practice dealing with such a distance from Earth. Right now, Robinson said, NASA is ready for scientists to develop specific scenarios to use that technology. "We don't want to just use it for a day for fun."

Having fun isn't a good way to mimic a Mars mission anyway, she added. "Think of a crew boarding that vehicle and waving goodbye and then being just the four of them for the next possibly three years," Robinson said. "That first leg of it, that first year, is like the worst family vacation you've ever imagined, because there's nothing to do."