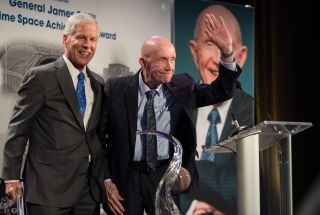 Former NASA astronaut Thomas Stafford, seen on the right in this photo from April, spoke before a group of congressional representatives on Nov. 13, 2019, about using the moon as a stepping-stone for a human voyage to Mars.
(Image: © Aubrey Gemignani/NASA)

That testimony came during a meeting of the House Committee on Science, Space and Technology's space and aeronautics subcommittee held on Wednesday (Nov. 13). The hearing focused on how to build a human exploration program that keeps Mars as a long-term goal shaping even lunar activities, including NASA's Artemis program to land humans on the moon in 2024.

"I want Americans to be the first to set foot on the Red Planet," subcommittee chair Kendra Horn, D-Okla., said during her opening statement. "Taking that giant leap will require every ounce of this nation's commitment and capability."

Throughout the hearing, Horn and her colleagues framed a range of issues in the context of a human mission to Mars. Two witnesses spoke at the hearing: retired NASA astronaut Thomas Stafford, who flew on two Gemini missions and Apollo 10, and A. Thomas Young, a former director of NASA's Goddard Space Flight Center in Maryland.

Both touched on the importance of high-quality leadership and strong agencywide staffing for such a significant project, and the subcommittee pressured them for more details about what they'd like to see happen within the ranks of NASA.

Stafford framed his response by citing some of the guiding figures of his spaceflight era. James Webb, who ran the agency from 1961 to 1968 and oversaw the bulk of the work behind the moon landing. Werhner von Braun brought his rocket-building skills from Nazi Germany to design the launchers of the era. And Samuel Phillips, an Air Force general who managed the development of the B-52 bomber, was brought in to oversee the Apollo program as a whole.

"I know of nobody who has the experience of Gen. Samuel Phillips today," Stafford said. "I don't know of any talent like [Webb and von Braun] available, so it's going to be tough to ugly."

Young agreed that leadership would be a key factor determining the program's success or failure. "This is not a criticism of the current NASA, it's a recognition that a Mars human program is probably the most challenging thing we have ever done as a civilization," Young said. "Even returning to the moon will be a challenge. So what that says is we've just absolutely got to have the best that the country has available."

In a coincidence, a report from NASA's independent Office of Inspector General released on Wednesday echoed similar concerns even within the context of just the targeted 2024 moon landing. The report, which is an annual project, touched on the importance of strong management for major NASA projects and of recruiting and retaining a skilled workforce across the agency.

Young was frank during the hearing, telling representatives that NASA leaders may well be forced to make difficult choices in order for a Mars landing to succeed.

"The plate is really full today," he said, compared to the Apollo era. "Today the array of things that NASA is charged with doing is overwhelming. I personally think that the leadership is going to have to, number one prioritize, but number two, is probably to eliminate some of the things that are currently being done."