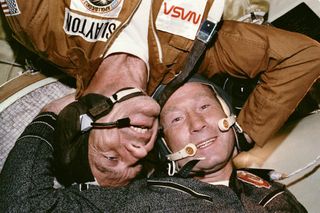 The Cold War experienced a bit of a thaw 40 years ago today (July 17), thanks to some off-Earth cooperation between the United States and the Soviet Union.

On July 17, 1975, three NASA astronauts aboard an Apollo spacecraft linked up with two cosmonauts in their Soyuz capsule. The historic Apollo-Soyuz Test Project meetup showed that two different space vehicles could dock in orbit, but it had far-reaching diplomatic consequences as well.

"I really believe that we were sort of an example, the space program — an example to the countries. We were a little [bit] of a spark or a foot in the door that started better communications," Apollo-Soyuz Test Project astronaut Vance Brand said in a 2000 interview. (Tom Stafford and Deke Slayton were his Apollo crewmates, while cosmonauts Aleksey Leonov and Valeriy Kubasov staffed the Soyuz.) [See photos from the Apollo-Soyuz Test Project mission]

"We thought they [the Soviets] were pretty aggressive people and ... they probably thought we were monsters," Brand added. "So we very quickly broke through that, because when you deal with people that are in the same line of work as you are, and you're around them for a short time, why, you discover that, well, they're human beings."

The Soviet Union's launch of the Sputnik 1 satellite in 1957 kicked off the space age — and a space race between that nation and the United States that raged on throughout the next decade.

But things changed in 1969, when NASA's Apollo 11 mission landed the first two people on the surface of the moon. Astronauts returned to the moon on five more Apollo missions, but the last visit came in 1972.

The United States and the Soviet Union then began focusing their human-spaceflight efforts closer to home, in low-Earth orbit. Both nations built space stations in the early 1970s: the Soviet Union lofted its first Salyut station in 1971, while the U.S. launched Skylab in 1973.

Those projects helped lay the foundation for the Apollo-Soyuz Test Project. The American and Soviet vehicles both launched on July 15, 1975. When the craft rendezvoused two days later, the astronauts and cosmonauts embraced and exchanged gifts, which included plaques and the flags of their respective nations.

The mission was brief — the Apollo crew returned to Earth on July 19, 1975, and the cosmonauts landed in their Soyuz two days later — but its impact has been long-lasting. The U.S. and Russia (the Soviet Union collapsed in the early 1990s) have been cooperating routinely in space since the 1990s, when American astronauts began visiting Russia's Mir space station.

Today, in fact, the first-ever yearlong mission aboard the International Space Station is being carried out by two spaceflyers — NASA's Scott Kelly and cosmonaut Mikhail Kornienko.

You can read more about the Apollo-Soyuz Test Project here: http://www.nasa.gov/topics/history/features/astp.html