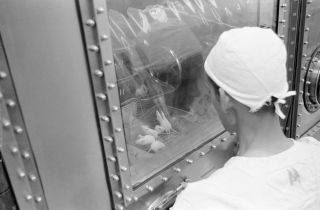 Mice have a long career in spaceflight experiments, like these that NASA injected with lunar rock after Apollo 11.
(Image: © NASA)

Editor's note: This story includes graphic descriptions of experiments conducted on mice that may upset some readers.

Today, Wernher von Braun is remembered as a rocket engineer who spent his career singlemindedly focused on enabling human spaceflight, first for Nazi Germany and then for the U.S.

But everyone has a past, and long before his career took off, von Braun was a student, unsurprisingly enough. Even then, he was obsessed with spaceflight, according to an account written decades later by a friend he met in 1931 that Space.com recently stumbled upon.

That friend, Constantine D. J. Generales Jr.,  recounts that at first he was overwhelmed by von Braun's focus on spaceflight during a brief meeting over lunch in Zurich. "After the usual exchange of amenities, he unexpectedly turned the conversation to rockets, and of all things, of using them to get to the moon," Generales later wrote. The recollections were originally presented at a spaceflight symposium in New York in 1968 and the text was later included in a collection published by the Smithsonian Institution.

A second conversation nearly stalled as well, when von Braun again went straight to rocketry. "To me, this whole thing, as I recall, seemed rather ridiculous, and I began making fun of my friend with 'a one-track mind.'" That changed when von Braun pulled from his pocket a letter allegedly signed by Albert Einstein, which apparently was enough to win Generales over to the dreams of spaceflight.

Related: NASA Fed Apollo 11 Moon Rocks to Cockroaches (And Then Things Got Even Weirder)

"As I read the letter and listened to Wernher I became aware of the possibility of future space travel and realized that it was not as absurd as it had seemed at first," Generales wrote. "The question immediately arose in my mind: what about man, can he withstand all these unknown forces and new experiences while being propelled by a sheet of flame into the vastness of space with the contemplated rocket? Right then and there I realized the inescapable necessity for the interdependence of medicine and technology in this great venture and I became a convert to the idea of exploration of space and space travel."

That question never quite disappeared, and Generales eventually became a doctor based in Manhattan who specialized in internal medicine and did research on the potential affects of spaceflight on human health. But when he first befriended von Braun, that career was still years away, and Generales set the duo's sights on a more modest study subject. "I remember clearly my verbal reaction as I handed the letter back to Wernher with the caution, 'If you want to get to the moon, it is better to try with mice first!'" Generales wrote, translating his original German in a footnote.

As Generales recounts, the pair proceeded with the same enthusiasm that von Braun brought to all his rocket-related projects. The future space doctor realized that spinning mice on a centrifuge would produce g forces equivalent to those experienced during a launch, and an experiment was born.

A brief digression: Today, all testing done on animals in the U.S. must be reviewed and approved by an institutional animal care and use committee, which considers how animals are treated before, during and after an experiment, the procedures used during the research, and how scientists intend to euthanize the animals should that be necessary. These committees were established in 1985.

Research on humans in the U.S. must be approved by an Institutional Review Board, a procedure established in 1966. A key early international document outlining ethics standards for human research, the Nuremberg Code, was written in 1947 in response to dozens of research projects conducted by the Nazis, often in concentration camps.

Back to the would-be space explorers. "A dozen white mice were easily 'borrowed' from the animal caretaker in the biology lab with no promise of return," Generales wrote. "Within a week's time, we were spinning mice arranged in four little hammock-like bags attached, 90° apart, to the perimeter of the bicycle wheel that was mounted on a stand." His account doesn't include specifics about how the g forces were measured, but he notes at one point that mice experienced up to 220 g's).

"We had no idea what the tolerance of the mice might be," Generales wrote. "In the beginning, after a few turns of the wheel, the poor mice, whose hearts you could feel pounding in the palm of your hand, were placed upon the table. They would not move. Were they frightened? But frightened mice ordinarily tend to run away! I nudged them and still they would not move."

He noted involuntary eye movements and observed that once those subsided, the mice began to move. He presumably euthanized them, as he recounts necropsy results that showed internal bleeding and hearts and lungs that were out of place.

"All the organs in the chest and abdominal cavities, as well as the brain, were displaced and torn in varying degrees from the surrounding tissues," Generales wrote. "It was obvious that the force which we had achieved was far greater than the mice could tolerate. I noticed that in some cases, the entire cardiovascular system was disrupted."

Von Braun and Generales didn't finish their experiment, testing only two-thirds of the mice they had acquired. "Right at the height of our activities, a dramatic incident occurred," Generales wrote. "A mouse accidentally slipped out of its cradle and was dashed against the wall leaving bloody stains at the point of impact. The next day (I believe it was the third day of our experiments), we were not too surprised that the landlady who was not accustomed to the odor of small laboratory animals, noticed 'the blood on the wall'; became infuriated; seized my notes as evidence of nonsensical cruelty and torture; and threatened to evict us and notify the police unless we immediately ceased these crazy experiments."

They apparently prioritized keeping von Braun's rooms over continuing their testing. "We had no choice but comply with our nonscientific but meticulous landlady," Generales wrote. "And, at the same time, we were very sad about our first casualty, which was, to the best of my knowledge, the first fatality of biomedical research conducted under admittedly crude but nevertheless effective simulated space-flight conditions." (Apparently, he doesn't consider the mice he necropsied as fatalities.)

"As a redeeming measure and to relieve our burdened conscience, we let loose the remaining lucky four mice in the fields to a happier life away from an institutional environment," Generales wrote.

Von Braun's landlady didn't seize the slides that Generales had prepared of tissues from the mice, and he eventually revisited the experiments, publishing the results in 1960 in the New York State Journal of Medicine. In his 1968 account, he calls the tests "unrefined in the face of today's sophisticated methods" but argues that they "produced for the first time scientific evidence as to what damage one might expect to unprotected living organisms."

Generales' account glosses over the years when the Nazis led Germany. In the late 1930s, von Braun led development on rockets that were more immediately used to launch missiles than to launch human explorers. Von Braun remained in Germany throughout World War II, during which concentration camp prisoners were forced to work in rocket factories. In 1945, he moved to the U.S. as part of Project Paperclip, an initiative to recruit German engineers. He worked on the Redstone rocket that launched the first U.S. satellite and eventually became one of the leading rocketeers at NASA. He died in 1977.

Generales was much less famous than his friend, but the two apparently stayed on good terms, appearing together at a dinner in 1958 at which von Braun received an award. In 1975, Generales accused the CIA of trying to persuade him to spy on Soviet scientists, according to The New York Times. Four months after he declined an agent's recruitment, he said, his office was burglarized, which he blamed on the government. He wrote to the White House requesting an investigation into the incident. (As of 1975, he said he hadn't received a response.) Generales died in 1988, according to a brief obituary published by The New York Times.

Mice did indeed become spacefarers before humans did. Both NASA and the Soviets began launching mice in the 1950s, although no living animal made it to orbit until the Soviet dog, Laika, in 1957. The first animals to survive spaceflight were two monkeys dubbed Able and Baker, who flew in 1959.

Governed by modern ethics guidelines, NASA continues to use mice in spaceflight research today, including in the Rodent Habitat module on board the International Space Station.