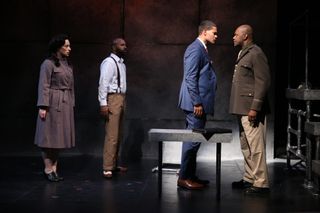 The cast during a scene from "The Winning Side," a fictionalized look at Wernher von Braun's involvement in spaceflight.
(Image: © Carol Rosegg)

NEW YORK — The show opens precisely when you would expect it to, on July 16, 1969, as a rocket carrying three American men lifts off into history.

But "The Winning Side," currently playing at New York's Theatre Row, doesn't stick to the script you may be expecting from that first scene. If you're looking for a detailed history of spaceflight itself and its mechanics, you've come to the wrong place. But the journey it lays out for the audience is a more valuable one: Instead, it goes in search of the moral fiber — or lack thereof — of the leading German import to the American space program, Wernher von Braun.

Von Braun was an engineer and program manager who specialized in spaceflight first in World War II Germany, where his V-2 rockets were launched against London and Antwerp, Belgium. After the war, he and his team defected to the U.S., beginning their careers with the Army and refashioning the V-2 to build the Redstone rocket that powered early American spaceflight. When NASA was created, von Braun joined the new agency, where his work culminated in the Saturn V that took humans to the moon. [Building Apollo: Photos from Moonshot History]

Von Braun and his engineering team were undoubtedly critical to U.S. efforts to catch up to the Soviets in space. But during his previous career in Nazi Germany, he seemed perennially unconcerned by his rockets being used as weapons rather than vehicles of exploration, and by his factories' being staffed by slave labor from concentration camps.

It's these grim "expediencies" the play confronts as it jumps back and forth across the 1940s, '50s and '60s, spanning von Braun's employment by Nazi Germany, his defection to the U.S., and the eventual fruits of his obsessed labors. There are plenty of scenes showing his professional life in the U.S. through interactions with the composite character of Army Maj. Taggert.

But his career before reaching America is shown through a purely personal lens, in scenes with a French actress named Margot Moreau, whom von Braun meets after seeing her star in a production of the classic Greek play Antigone. Moreau is a fictionalized version of a woman from von Braun's historical past, who is known today from a letter she wrote to his NASA office in 1963, two decades after they met. From this letter, playwright Jim Wallert has built a would-be conscience for von Braun.

They embark on an affair, despite her initial concerns about the danger of "horizontal collaboration" in occupied Paris. As Melissa Friedman's powerful Moreau gradually pieces together how complicit von Braun's role in the Nazi military makes him in Germany's war crimes — and how little he cares about any collateral damage on the way to his spaceflight dreams — she repeatedly tries to persuade him to leave the program, but he refuses to sacrifice what he sees as the only way for him to someday reach space.

The play can feel jerky at times as it bounces back and forth between years, although by the end of the show, the pieces fall together well enough to justify the tactic. Throughout, Sullivan Jones strikingly portrays the willful blindness of von Braun to the moral consequences of his work.

That blindness is strongest at the climax of the show, which underscores just how easy it is to never see anything you don't want to see — a message just as worth remembering among today's seas of moral quicksand as it was during the Apollo program.

"The Winning Side" will play until Nov. 4; you can get tickets here.