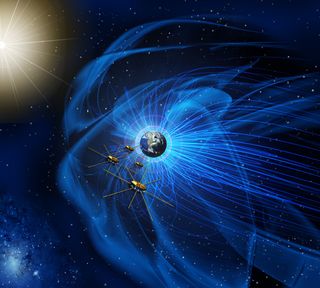 An artist's depiction of satellites that are paving the way for a lunar GPS system.
(Image: © NASA)

When the next generation of crews lands on the moon's surface — possibly as early as 2024 — NASA plans to use a lunar  Global Positioning System (GPS) to help astronauts find their way.

Such a system would prevent repeats of the navigational problems that bedeviled Apollo astronauts in the 1960s and '70s. The moon is notoriously difficult to navigate because it's hard to judge the distance and size of lunar landmarks by eyesight alone. There is no atmosphere to soften the horizon, as humans are used to on Earth; Apollo astronauts occasionally struggled when judging the distance to craters that were marked on their maps obtained from orbital imagery. The Apollo 14 crew, for example, missed a crater they planned to visit by only 100 feet (30 meters).

So, given that the agency is once again focusing on crewed missions to the moon, NASA is developing a special receiver that could pick up GPS signals all the way from lunar orbit. GPS is a U.S. military-operated system that relies on between 24 and 32 satellites orbiting above the Earth at any given time, and is a popular tool for everything from tracking devices to vehicle navigation systems.

Related: How Does GPS Work?

If all goes to plan, NASA's new system would build a lunar receiver to pick up signals from GPS satellites in orbit around Earth. This lunar GPS would support both surface missions and personnel piloting the Orion spacecraft and lunar Gateway space station that NASA plans to build.

"GPS is a system made up of three parts: satellites, ground stations, and receivers. The ground stations monitor the satellites, and a receiver, like those found in a phone or car, is constantly listening for a signal from those satellites. The receiver calculates its distance from four or more satellites to pinpoint a location," NASA said in a statement.

"Instead of navigating streets on Earth, a spacecraft equipped with an advanced GPS receiver may soon be paired with precise mapping data to help astronauts track their locations in the vast ocean of space between the shores of Earth and the Moon, or across the craterous lunar surface."

NASA has navigated many spacecraft near the moon in recent decades, but the directions always came from NASA communications networks. GPS can support more satellites, and will free up precious bandwidth from these other NASA networks that can be used for other spacecraft.

One technological challenge is that GPS is most accurate at lower altitudes, below the satellites' orbit of 12,550 miles (20,115 kilometers). But NASA has already extended GPS-based navigation to higher altitudes for missions such as Geostationary Operational Environmental Satellites (GOES) and the Magnetospheric Multiscale Mission (MMS), and the agency believes it's possible to go even higher.

The team plans to build on MMS's Navigator GPS system by developing better electronics, antenna technology and a more accurate clock. (GPS uses atomic clocks to calculate the time required for signals to move between its satellites; the signals are then triangulated to determine the position of an object.) Goddard is already working on a better GPS receiver that is not only useful for lunar missions, but also for proliferating small satellites.

The newest GPS receiver concept in orbit right now is NavCube, which combines the capabilities of MMS's Navigator GPS and a flight computer platform called SpaceCube. A version of NavCube recently launched to the International Space Station and will be testing out its GPS signal processing while it demonstrates how to do superfast X-ray communications in space.

"The GPS processing power of NavCube, combined with a receiver for lunar distances, should provide the capabilities needed to use GPS at the moon," NASA added. The team plans to finish work on the newest prototype later this year, then work on launching prototype technologies for testing in space.