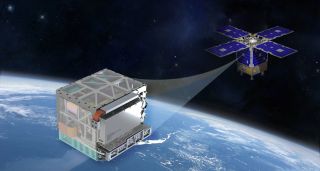 NASA has so many spacecraft at Mars that it's a challenge to communicate with them all, but technology being launched later this month could eliminate that problem in the future.

That technology is the Deep Space Atomic Clock, a test system that NASA has been developing for two decades. It's meant to help spacecraft navigate and communicate without the need for so much support from Earth. The STP-2 mission, scheduled to launch onboard a SpaceX Falcon Heavy rocket on June 24, will conduct the clock's first test in space.

"Every single spacecraft exploring deep space today relies on navigation that's performed back here at Earth to tell it where it is and, much more importantly, where it's going," Jill Seubert, a deep-space navigator at NASA's Jet Propulsion Laboratory in California, said during a news conference held on June 10. "We have to navigate from Earth because the clocks onboard spacecraft are really not good at accurately measuring time, but if we can change that, we can revolutionize the way that we can navigate deep space."

And that's where the Deep Space Atomic Clock comes in. Like atomic clocks that won't be traveling to space, it can measure time to a billionth of a second — but it takes up the space of a gallon jug, not of a refrigerator. That miniaturization means the instrument can be loaded onto a spacecraft and launched.

Once in space, the clock should be able to keep time accurately without any intervention from Earth. That's a stark contrast to the clocks on modern GPS satellites, which have to be corrected twice a day to remain on time. But accurate time-keeping is vital for spacecraft navigation, Seubert said.

"Tracking a spacecraft as it travels through space is fundamentally a problem of measuring time," she said. "We can't just pull out a ruler and measure how far away our spacecraft is. So instead, we measure how long it takes for the spacecraft to echo back a radio signal that is sent from Earth."

Those radio signals come encoded with a precise time stamp of when they were produced. And because those radio signals are light waves and the speed of light is constant, it's a straightforward math problem to solve for the distance the signal traveled. The signal only needs to travel from Earth to the spacecraft, and the spacecraft's onboard computer can navigate itself from there.

This autonomy would offer huge benefits for crowded destinations like Mars and for spacecraft at the outer edges of the solar system, where round-trip communication with Earth takes too long to be practical.

Only one or two of the outposts in NASA's Deep Space Network that communicates with all the agency's spacecraft can point toward Mars at any given time. And right now, the network needs to ping each spacecraft visitor one at a time to help it stay on course. "All of those spacecraft that are at Mars right now need to share tracking time with the Deep Space Network," Seubert said. "They're time-sharing essentially."

That's why the atomic clock's ability to navigate based on a simple one-way radio signal is so appealing: All the spacecraft at the Red Planet can simultaneously check their locations using the same signal, no time-sharing required. "What this means is that you can essentially support an infinite number of spacecraft going to or around Mars with this architecture," Seubert said.

And the system can also be used by rovers and humans on the surface of Mars or at still-more-ambitious destinations, Seubert said; the system would function like a more exotic form of GPS.

"Just imagine an astronaut hiking on Mars, and maybe Olympus Mons is rising in the background," Seubert said. "She's checking her Google Maps Mars Edition to see where she is and chart a course to get where she needs to go."

That scenario is still far in the future, but getting real data about how the Deep Space Atomic Clock performs in space is the first step. Once the instrument is safely in orbit, Seubert and her colleagues will confirm that it keeps time as expected and can withstand a year in the hazardous environment of space, and they'll use GPS data to vet the instrument's readings.

Visit Space.com on June 24 for complete coverage of the Falcon Heavy launch and the STP-2 mission.