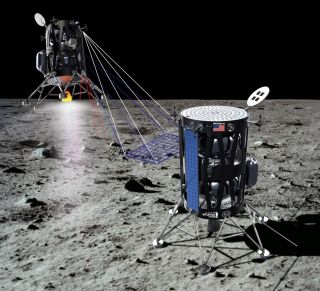 A private lunar lander now has a rocket ride for its first moon mission.

The robotic Nova-C lander, built by Houston-based Intuitive Machines, will launch atop a SpaceX Falcon 9 rocket on a NASA-sponsored flight in 2021, representatives of both companies announced today (Oct. 2).

"We're honored that Intuitive Machines selected Falcon 9, SpaceX’s tried-and-true workhorse, for this pioneering mission to the moon," SpaceX President Gwynne Shotwell said in a statement. "Our partnership with Intuitive Machines is a great example of two private companies working together with NASA to advance space exploration."

NASA sees these deals as providing cost-effective ways to learn more about the moon and demonstrate technologies that could help people explore Earth's nearest neighbor. These are key near-term priorities for the space agency, which plans to put two astronauts down near the lunar south pole by 2024 and build up a sustainable human presence on and around the moon by 2028, all as part of an ambitious program known as Artemis.

Nova-C can carry at least 220 lbs. (100 kilograms) of cargo to any spot on the lunar surface, Intuitive Machines representatives said. On the upcoming mission, which is targeted for liftoff in July 2021, the lander will tote five NASA CLPS payloads and will beam data home for 13.5 Earth days.

The company will add some payloads from other customers to fill out the Nova-C's cargo manifest, Intuitive Machines representatives said.

Astrobotic plans to launch its Peregrine lander at about the same time that Nova-C takes flight for the first time. But Peregrine will fly on a different rocket, United Launch Alliance's Vulcan Centaur, which is still in development. The 2021 Peregrine mission will be the first for both the lander and its launch vehicle.

New Jersey-based Orbit Beyond had been planning to launch its Z-01 lander in September 2020. But in July, NASA announced that the company had backed out of its CLPS deal because it would not be able to meet the ambitious timeline.