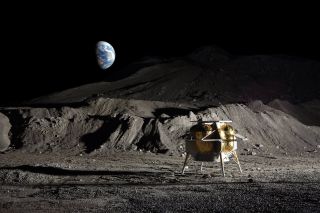 Artist's illustration of Astrobotic's Peregrine lander on the surface of the moon.
(Image: © Astrobotic)

A private moon lander now has a ride for its historic 2021 mission.

The mission will be the first operational flight for both vehicles.

"We are so excited to sign with ULA and fly Peregrine on Vulcan Centaur," Astrobotic CEO John Thornton said in a statement. "When we launch the first lunar lander from American soil since Apollo, onboard the first Vulcan Centaur rocket, it will be a historic day for the country and commercial enterprise."

The mission is flying via NASA's Commercial Lunar Payload Services (CLPS) program, which this May awarded Astrobotic $79.5 million to deliver up to 14 NASA payloads to the lunar surface on Peregrine. The lander will tote a variety of other payloads as well; 16 different customers have signed up for the flight to date, representatives of the Pittsburgh-based company said.

Vulcan Centaur is the successor to ULA's workhorse Atlas V rocket, which has launched many high-profile spacecraft over the years, including NASA's Curiosity Mars rover, New Horizons Pluto probe and OSIRIS-REx asteroid mission. ULA has been developing the next-gen Vulcan since 2014.

Astrobotic is the second company to commit to Vulcan Centaur in less than a week. On Aug. 14, Sierra Nevada Corp. announced that the rocket will launch the company's Dream Chaser space plane on robotic cargo missions to the International Space Station for NASA.

CLPS aims to put NASA science and technology payloads down on the lunar surface. The main goal is to aid the agency's Artemis program, which plans to land astronauts near the moon's south pole by 2024 and establish a long-term, sustained human presence on and around Earth's natural satellite shortly thereafter. Such activity will help prepare NASA and its partners to make the leap to Mars in the 2030s, agency officials have said.

Two other American companies, Orbit Beyond and Intuitive Machines, got CLPS deals similar to Astrobotic's. Orbit Beyond recently dropped out, stating that it could not meet the aggressive timeline. The company had been aiming to launch its first moon-landing mission in September 2020.