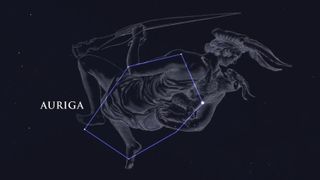 This week, if you venture outside at around 8:30 p.m. local time and look high overhead, you'll see one of the brightest stars in the sky, a golden-yellow jewel that bears the name Capella. In the star brightness rankings, Capella is No. 6. The name is Latin for "she-goat" or "nanny goat," and that indeed is what this star is known for. It marks the position of a small female goat.

Now, before we get too far afield, it should be noted that Capella is the brightest star in the constellation Auriga. And who was Auriga, you may ask? You could say that he was the "Ben-Hur of the nighttime sky."

And yet, if that's so, how do we end up with his brightest luminary representing of all things, a goat?

Auriga is one of those star patterns whose exact origin is a hopeless mix of antique conceptions. The Greek and Roman legends made Auriga a famed trainer of horses and the inventor of the four-horse chariot. The charioteer is thought to represent Hephaestus, the crippled god of fire, who invented a chariot to move his body about.

But the most ancient legends had Auriga pegged as a goatherd and a patron of shepherds. Later on in the winter and into spring, at a time when shepherds spend nights out in the fields with their flocks, Auriga is prominent, high in the west-northwest sky. And it may have been that Capella and its surrounding retinue of stars may have been welcomed among pastoral and nomad tribes. This might explain the identification of some of its stars with a mother goat and her kids; the mother goat's front legs are often depicted perched on Auriga's right shoulder while with his right arm he clutches two or three young goats (the kids), which are represented by a little triangle of fainter stars not far from Capella. In fact, Capella itself is sometimes referred to as the "Shepherd's Star" in English literature.

As a result, some of the old star atlases have allegorical pictures showing Auriga standing in a chariot with a whip in his hand, while others depict him standing complacently by himself, holding a family of goats.

But the vast majority of old atlases show Auriga as a combination of both guises: wearing a charioteer's helmet and holding a whip in his left hand — though there's no chariot or horse — while at the same time carrying a family of goats in his other arm. In many ways, it is a star picture that doesn't make too much sense, but yet high over our heads on these cold winter evenings we see the "free-wheeling" Auriga ... with his goat flock ... just the same.

Similarly, if you want to trace out Auriga in the sky, you have not one but two options. Auriga is often positioned nonchalantly, standing on one of the horns of Taurus, the bull (this despite the fact that Taurus is usually pictured charging furiously at Orion, the hunter!). If we add the bright star that marks the bull's horn tip — known as El Nath — then the primary stars of Auriga form a pentagon or a large, muffin-like figure that rises with its bulging part at the bottom. Capella is near the top of the pentagon or muffin.

But El Nath does not belong to Auriga, it properly belongs to Taurus. So, if we ignore that one single star, Auriga becomes a kite. In his book, "A Primer for Star Gazers" (Harper & Brothers, 1948), author Henry M. Neely takes credit for inventing "The Kite in Auriga," writing:

"If you find it easier to locate the pentagon than my kite, that will be all right. The whole object of star-gazing is to locate stars, and whatever figure your own imagination suggests is the best for you."

Capella is located 43 light-years from Earth, or "right down the street," relatively speaking, so far as cosmic distances are concerned.

Capella is composed of four stars. The two main stars are known as Capella Aa and Capella Ab, two giant yellow stars, about 2.5 times more massive than our sun. They are separated from each other by only about 69 million miles (111 million kilometers), or 0.7 astronomical units (one astronomical unit is equal to the distance of the Earth from the sun: about 92.9 million miles, or 149.5 million km). The binary stars circle each other once every 104 days. The other pair in this family, known as Capella H and Capella L, are about 10,000 astronomical units from the first pair, or about 930 billion miles (1.5 trillion km).

Other objects of interest in Auriga include Epsilon Aurigae, one of the three stars in the triangle depicting the "kids." Epsilon is the kid star nearest to Capella. The proper name for this star is Almaaz, Latin for "billy goat," but that name is rarely referred to; the Epsilon moniker is most often used. This is a supergiant star that has a companion circling it, apparently shrouded in a gigantic disk of opaque gas and interstellar dust. At 27-year intervals, when this companion passes in front of Epsilon, its brightness drops by a full magnitude, from plus 2.9 to plus 3.8. The dimming effect lasts nearly two years from start to finish, with the deepest part of the eclipse lasting about a year. The last eclipse was in 2009 and the next is scheduled for 2036.

There are also three beautiful star clusters that are well seen through good binoculars or a low-powered telescope. Two are situated within the pentagon: Messier 36 (M36) is a bright open cluster of about 60 stars of 8th magnitude and fainter. M38 is a small cluster of stars that resembles the Greek letter π (pi) when seen in a small telescope. "Norton's Star Atlas" (Dutton, 2003) describes it as "a striking, loose, cruciform cluster in a glorious neighborhood."

Finally, there is the best of the three: M37, located just outside the pentagon, is an exceptional star cluster with an apparent size almost as big as the moon in the night sky, and it's one of the finest clusters in the northern sky. Binoculars reveal a misty spot, but a small telescope will reveal a large number of stars. In his book "A Cycle of Celestial Objects," originally published in 1844, Adm. William Henry Smyth wrote: "[It is] a magnificent object, the whole field being strewed as it were sparkling gold dust ... it resolves into infinitely minute points of lucid light."

So you see? Despite the confusion over whether Auriga is a charioteer or a goatherd, as a constellation he's really not so baaaaaaaad.