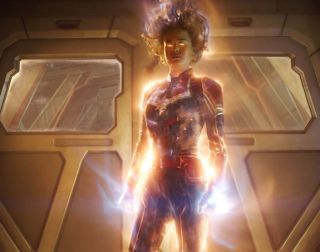 A fast-moving Captain Marvel could explain her appearance in an "Avengers: Endgame" trailer.
(Image: © Marvel Studios)

Warning: This story contains spoilers for "Captain Marvel" and the trailer for "Avengers: Endgame."

Looks like Captain Marvel will have a key role to play in the upcoming "Avengers: Endgame" movie. And here's the plot twist: It involves a situation that looks a lot like Einstein's theory of special relativity in action. Captain Marvel (aka Carol Danvers) travels close to the speed of light and arrives at a key destination unaged, even though she leapt a generation into the future.

How she did it

Captain Marvel's origin story movie, also called "Captain Marvel," shows how in the 1990s, Danvers accidentally acquires the ability to travel at very high speeds, close to the speed of light. Danvers and her supervisor are testing an aircraft that uses special technology to travel close to light speed. The aircraft is destroyed in an accident, and in the incident, Danvers picks up the same speedy powers as the aircraft. (To see exactly how this happens, we'll let you watch the movie.)

In the Marvel universe, the only way ships can rapidly move from place to place is by using portholes — locations where you can jump across long distances. That means that nobody is using warp drive or flying faster than the speed of light; it's not a "Star Trek" or "Star Wars" kind of universe here. That's super important to the plot of the film.

At the end of the movie, Captain Marvel zooms far off from Earth into a distant part of the universe, in a zone without these portholes, to help an alien race. Then, if you stick around for the credits, you see the Avengers (in the present day) calling Captain Marvel for help to confront Thanos, the enemy who killed many of their allies as well as half the population of the universe. In a trailer for "Avengers: Endgame," which happens in the present day or the near future, the Avengers glumly sit in a laboratory on Earth and consider their options.

Suddenly, Captain Marvel appears in the same laboratory and asks what's going on. She doesn't look a day older than she did in 1995, when she left Earth for the last time. Meanwhile, the other superheroes in the scene have clearly been aging.

How real is Captain Marvel's situation?

Paul Sutter is a cosmologist at The Ohio State University who is known for his podcast (and video series) "Ask A Spaceman." While he hasn't seen "Captain Marvel," when the plot was described to him, he said that sounded exactly like how Einstein's theory of special relativity works.

Just briefly, special relativity says that space has a speed limit — the speed of light — and thus, space and time and mass are intricately linked. If you move faster through space, you gain mass and you also age more slowly than somebody who is on Earth. It's a situation that has been proved time and time again, as counterintuitive as it may sound.

Sutter cited clocks on GPS satellites whose signals must be calibrated — since the clocks move more slowly in orbit — as an example. Another example is the muon, a tiny particle that usually lasts only a few moments after forming — that is, unless it's moving at close to the speed of light, where it can persist for minutes or hours.

"Moving clocks run slow," Sutter told Space.com. "The faster you move in space, the slower you move in time. It's a consequence of the connection between space-time ... if you go more in one direction, you go less in another direction."

He noted that there is no engineering solution yet available to get humans close to the speed of light. But ignoring that practical problem, he said that a human traveling in a spaceship (or bodysuit) at that speed would experience the exact same effects that Captain Marvel went through.

"You feel totally normal," he said. "You eat breakfast, you go for a walk in your spaceship, you do your work, everything feels normal … you go out on your journey and you futz around the galaxy. When you come back, you find out that you and the clock on your wrist has only gone by a few days or a few weeks. Meanwhile, the clock back on Earth has gone by years, decades, centuries, millennia, depending on how fast you were going and how fast you've gone."

When reminded about 2014's "Interstellar" — a film where one fast-traveling character returns to Earth and encounters the consequences of that travel — Sutter said it and many science fiction movies commonly play with the implications of relativity.

"If you really want to get away from your family," he joked, "go at the speed of light, and when you come back, no one will know who you are anymore."