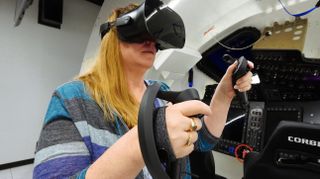 Boeing software engineer Connie Miller tries out a Varjo virtual reality headset, which astronauts that ride on Boeing's Starliner capsule will use to train for their missions.
(Image: © Boeing)

Astronauts will get some next-gen training before they ride Boeing's next-gen spacecraft.

Varjo's VR-2 devices will allow astronauts to simulate, in high resolution and with high fidelity, every aspect of a Starliner mission to the International Space Station (ISS), Varjo and Boeing representatives said.

"We are proud to be delivering the technology that is pushing industrial training applications to their furthest reaches — even to space," Varjo co-founder and CEO Niko Eiden said in a statement.

"With our devices, astronauts can see and virtually interact with the switches and control panels inside their Starliner capsule and read the real-time data on their crew displays," Eiden said. "Advancements like this have the potential to transform the way any pilot is trained."

Boeing has been developing Starliner with funding from NASA's Commercial Crew Program, most notably a $4.2 billion contract signed in 2014 that also covers six operational crewed missions to and from the ISS. SpaceX holds a similar deal, which Elon Musk's company will fulfill with its Crew Dragon capsule.

The astronauts who will fly on CFT — Boeing's Chris Ferguson and NASA's Mike Fincke and Nicole Mann — have been training for their mission for a while now, using Starliner mockups in Houston and other tools. The VR headset will augment such work, Boeing representatives said.

"We're not looking to replace the physical simulators in Houston," Connie Miller, a Boeing Starliner software engineer, told Space.com. "But it will certainly enhance that training, to be able to do it from remote locations."

One such "remote location" is the launch site itself, Cape Canaveral Air Force Station in Florida. Astronauts will spend the two weeks immediately before liftoff in quarantine at NASA's nearby Kennedy Space Center, ensuring that they launch in good health and don't carry disease-causing germs to the ISS. With the new VR tool, Starliner crewmembers can continue in-depth training for their mission during this home stretch, Miller said.

In the next couple of weeks, Boeing plans to ship the VR hardware to Florida, where Ferguson, the CFT commander, can start working with it. The wheels for this move were first set in motion several months ago, but the rollout was halted by measures taken to combat the spread of the novel coronavirus, Miller said.

The pandemic's emergence highlights the need for the VR tech, she said.

"We had the vision," Miller said. "We didn't realize it would be a mandatory piece of things as quickly as it did."

Astronauts have used VR tools before; NASA astronauts commonly use such tech to prep for spacewalks, for example. But the Starliner training will break new ground in its extensive use of VR gear, which will help prep astronauts for every aspect of their mission, from liftoff to landing, Boeing representatives said.

Varjo, for its part, will apply the lessons learned from the Starliner work to other aspects of its business, such as pilot training, Eiden said. But the company is also getting something else out of the newly announced partnership.

"This is one of those passion things; we have a bit of space fever at Varjo at the moment as well," he told Space.com. "So, having the chance to be part of this Boeing program — it's been just fantastic."