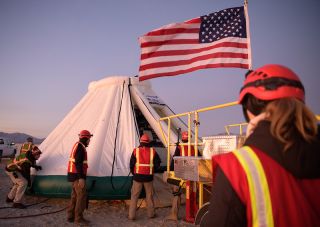 "Three parachutes, six airbags and a beautiful soft landing," Fincke said yesterday from White Sands, where he, fellow NASA astronaut Mann and Boeing's Ferguson had gathered to watch the touchdown. "I can't wait to try it out."

OFT launched early Friday morning (Dec. 20) on a planned eight-day mission that was supposed to feature a docking with the ISS. But Starliner suffered an error with its onboard timing system, which manifested soon after liftoff. As a result, the capsule was not able to perform the engine burn required to send it on its way to the orbiting lab.

Launch and landing went well, however, and the reusable capsule was able to notch a number of other milestones during its 48 hours in space, noted Ferguson, a former NASA astronaut himself.

"Awesome conclusion to the first Starliner mission. Landed within a few hundred meters of target.  Systems checked out very well. No dock.... but many flight test objectives complete. This was a great @BoeingSpace day!" he said via Twitter yesterday.

During a press conference held Friday shortly after launch, both Fincke and Mann said the timing anomaly didn't worry them. The issue wasn't a dangerous one, the astronauts said. And they added that, had crewmembers been aboard, they could have troubleshot the timing issue and gotten Starliner on the proper path to the ISS manually.

"We are looking forward to flying on Starliner," Mann said Friday. "We don't have any safety concerns."

NASA's Commercial Crew Program has funded the development of both Starliner and SpaceX's Crew Dragon capsule, in an effort to return an orbital human spaceflight capability to American soil. Since NASA's space shuttle fleet was retired in July 2011, the nation has been dependent on Russian Soyuz spacecraft to get its astronauts to and from the orbiting lab.

Crew Dragon aced its version of OFT, a six-day uncrewed mission called Demo-1, this past March. SpaceX is now prepping for a critical in-flight test of the capsule's emergency escape system on Jan. 11. A crewed test flight to the ISS would then follow for the California-based company.

It's unclear when Starliner will be cleared to carry Fincke, Mann and Ferguson up on their demo mission, which is called Crew Flight Test (CFT). It will take a while for the NASA and Boeing teams to go through all the data from OFT, at which point a decision will be made whether to go ahead with CFT or launch another uncrewed mission that actually makes it to the ISS.

And whenever CFT gets off the ground, this particular Starliner won't be involved. The newly returned capsule will be prepped for Boeing's first contracted, operational mission. That flight will be commanded by NASA astronaut Suni Williams, who revealed yesterday that the flight-proven Starliner now has a name: "Calypso."