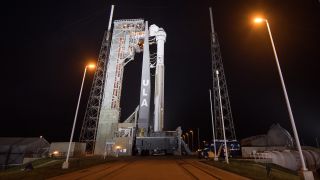 Boeing's CST-100 Starliner spacecraft for commercial astronauts is set to launch on its first uncrewed test flight to the International Space Station (ISS) on Friday (Dec. 20). If all goes well, Boeing will start launching astronauts to the ISS in 2020.

Bringing people into space is a complex process, especially because you need to take safety into consideration. This mission, called the Orbital Flight Test (OFT), will aim to demonstrate that Starliner can safely ferry astronauts to the ISS and back to Earth. Here are the steps for the Starliner OFT mission, from launch to landing.

The launch campaign for a Starliner mission, like OFT and future crewed missions, typically starts 45 days before Starliner heads to space, according to Boeing's website. During this time, teams at the United Launch Alliance (ULA) "stack," or assemble, the Atlas V rocket at Space Launch Complex 41, at NASA's Kennedy Space Center in Florida. The Starliner goes on top of the Atlas V roughly two weeks after the rocket stacking begins. Once the rocket and Starliner are fully integrated, Boeing and NASA spend several weeks practicing launch procedures and checking systems for readiness.

On launch day (if there were astronauts on board), up to four astronauts would head to the pad 3 hours before liftoff — but this first test will be uncrewed. However, there is one "dummy" astronaut on board: a so-called anthropomorphic test device named Rosie. The Starliner will also carry about 600 lbs. (279 kilograms) of cargo to the space station, including some Christmas gifts for the astronauts. The last of the cargo was loaded onto the Starliner on Saturday (Dec. 14), six days before liftoff, said John Mulholland, vice president of Boeing's Commercial Crew program, in a briefing following the flight readiness review on Dec. 12.

Liftoff! Starliner heads to the ISS

Liftoff for the first Starliner test flight is scheduled for 6:36 a.m. EST (1136 GMT) on Friday (Dec. 20). This instantaneous launch window will ensure that Starliner's launch site is underneath the orbital plane of the ISS, according to Spaceflight Now. After 4 minutes and 35 seconds of flight, the Atlas V rocket will separate from the Centaur upper stage that will carry Starliner to orbit.

About 15 minutes after launch, the Centaur upper stage will power off and separate from Starliner, after which the rocket stage will fall back to Earth and splash down into the South Pacific Ocean. Starliner will then continue to make its way to the space station using its own built-in thrusters and navigation system. The final part of launch is roughly 31 minutes after liftoff, Boeing said in a launch guide, when Starliner uses four orbital maneuvering and attitude control thrusters to put itself into the right orbit. It is expected to arrive at the ISS on Saturday (Dec. 21) at 8:27 a.m. EST (1327 GMT), after nearly 26 hours of flight.

Starliner has computer smarts on board that allow the spacecraft to dock autonomously with a port at the International Space Station. To retrofit two docking ports of the Harmony module that were originally built for the space shuttles, astronauts installed new International Docking Adapters in a series of spacewalks.

A few dozen miles from the orbiting complex, Starliner's cameras can pick up the ISS, due to its bright appearance among the stars, Boeing said on its website. Thrusters on the spacecraft automatically keep it pointed in the right direction as it pulls into the space station. Starliner will pause twice on its way to the space station, at a distance of 656 feet (200 meters) and 32 feet (10 meters), to give controllers time to ensure everything is okay for docking, Boeing said in the launch guide.

While ISS astronauts use the station's Canadarm2 robotic arm to grapple incoming cargo vessels, Starliner is designed to dock on its own. NASA astronauts Jessica Meir and Christina Koch will monitor Starliner's automated rendezvous and docking, according to NASA's ISS blog. After Starliner docks, the two astronauts will conduct leak checks before opening the hatch and entering the spacecraft.

Week at the ISS

While Starliner is rated to spend several months in space, the first mission to the ISS will last about a week. Astronauts on the orbiting complex will spend that time unloading cargo from Starliner and sending data back to mission control about how the inside of the spacecraft looks.

Typical cargo items on flights include fresh food, a refill of consumable supplies that astronauts need (like toilet paper), and perhaps some equipment (like spacesuit parts) or science experiments. In the launch readiness review on Dec. 12, Boeing officials said there would be Christmas gifts on board for the astronauts, though they did not disclose exactly what those gifts are.

Starliner will begin its deorbit burn above the Pacific Ocean at 5:01 a.m. EST (1001 GMT), according to NASA. The crew module's exterior will experience outside temperatures of up to 3,000 degrees Fahrenheit (1,650 degrees Celsius) during its reentry. The parachutes will begin to pop out about 30,000 feet (9 kilometers) above the ground. First, Starliner will throw away its heat shield. Then, two drogue parachutes will deploy to slow down the spacecraft. After they fall away, three main parachutes will open up.

Airbags will inflate roughly 3,000 feet (0.9 km) above the ground to help the spacecraft make a soft landing at 5:47 a.m. EST (1047 GMT) at the White Sands Missile Range in New Mexico, where ground crews will go out to the spacecraft for recovery operations.