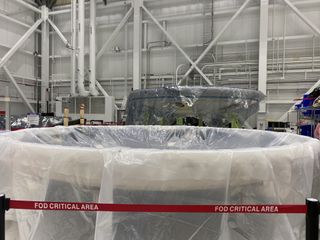 The craft's heat shields are standing by to be installed once the vehicle is closer to completion.
(Image: © Amy Thompson/Space.com)

CAPE CANAVERAL, Fla. — Boeing's first Starliner capsule is on the launchpad waiting to fly, and Space.com got a first look at its successor, which will carry astronauts for the first time.

That capsule is currently tucked inside a former space shuttle parking garage, where Boeing invited members of the media to check it out in November. The vehicle will fly on Starliner's first crewed test mission, dubbed Crew Flight Test. Boeing astronaut Chris Ferguson will join NASA astronauts Nicole Aunapu Mann and Mike Fincke in the capsule when it flies.

For now, the Crew Flight Test vehicle is sitting on a stand in the former orbiting processing facility with its hatch open so engineers can access its insides while they work. With its outer shell removed, the crew capsule looks less like a spacecraft and more like a maze of wiring and tubing. Boeing officials said during the event that the vehicle is further along in its development than it looks. The craft is slated to fly in mid-2020, assuming everything goes smoothly with another Starliner milestone, the uncrewed flight test.

According to Boeing officials, the Crew Flight Test vehicle was originally used for environmental testing. Once that was complete, the craft returned to Florida, where it was outfitted with a few minor upgrades. Currently, engineers are installing fuel lines and tanks.

There are some final assembly steps to finish before the craft is completed. After that, it will be joined to the service module and will go through some final testing.

Its predecessor Starliner is preparing for its first flight to the International Space Station, with the gumdrop-shaped vehicle currently scheduled to blast off atop an Atlas V rocket at 6:36 a.m. EST (1136 GMT) on Friday, Dec. 20.

Once it arrives, it will dock with the space station and stay in orbit for about a week. Then, Starliner will undock and make the trek back to Earth, where it is scheduled to land in White Sands, New Mexico, around 5:28 a.m. EST (1028 GMT) on Dec. 28.

Dubbed the Orbital Flight Test, this uncrewed first voyage of Starliner will pave the way for future flights that will eventually carry astronauts to the space station. During the uncrewed test flight, the vehicle will prove it can autonomously dock with and undock from the space station and go through a variety of different test objectives. The flight will also evaluate the vehicle's systems, ensuring that everything is working as planned.

For example, Boeing engineers expect to determine whether the vehicle reaches the proper orbit, navigates as it should and docks with the space station. Essentially, the goal of the Orbital Flight Test is to make sure the vehicle's systems work.

That would mean that the crewed flight test focus will be on evaluating the human elements of the vehicle, including whether the hygiene and environmental control systems work and what the noise levels are like inside the capsule.

Boeing's Starliner capsule is one of two new private space taxis that NASA has reserved to ferry its astronauts to and from the International Space Station. Currently, the agency relies on Russian rockets to transport astronauts to the orbital outpost. (A costly arrangement, as each seat on the three-person Soyuz currently costs NASA about $85 million.)

Earlier in November, another Starliner spacecraft took part in a different type of preflight procedure called a pad abort test. Each Starliner vehicle (and every capsule that carries humans) is equipped with a safety feature called a launch abort system, which can carry the astronauts away from the rocket should something go wrong before or during flight.

For the most part, the pad abort test went as planned, except for one tricky piece of hardware: parachutes. Only two of the Starliner's three parachutes deployed properly, but Boeing officials said this performance was within the vehicle's safety parameters.

Currently, the first crew of Ferguson, Mann and Fincke is set to blast off sometime in the summer of 2020.