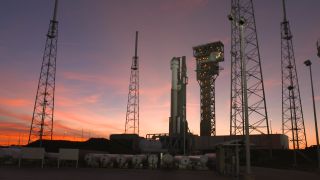 Boeing's CST-100 Starliner spacecraft is ready to deliver holiday presents on its inaugural trip to the International Space Station.

On Thursday (Dec. 12), NASA and Boeing held a Flight Readiness Review (FRR), an in-depth assessment on how ready a mission is to proceed, in anticipation of Starliner's first uncrewed Orbital Flight Test (OFT) mission, which is scheduled to launch Dec. 20 at 6:36 a.m. EST (1136 GMT) from Cape Canaveral Air Force Station in Florida.

During the review, mission managers from both NASA and Boeing presented their assessments of the readiness of the Starliner launch and concluded that the craft will be ready to liftoff atop a atop a United Launch Alliance Atlas V rocket on Dec. 20.

"I am happy to announce we are go for launch," NASA Deputy Administrator Jim Morhard said during a press teleconference following the FRR.

"I thought it was a very good review. Our international partners were part of this review ... they're satisfied and ready to proceed," Kirk Shireman, the manager of NASA's International Space Station Program, added during the teleconference.

John Mulholland, vice president and program manager of Boeing's Commercial Crew Program, added that there was unanimous approval to proceed with the launch.

.@NASA and @BoeingSpace are proceeding with plans for Boeing’s Orbital Flight Test following the Flight Readiness Review.Launch of the CST-100 #Starliner spacecraft atop a @ULALaunch #AtlasV rocket remains scheduled for Dec. 20 at 6:36 a.m. ET. https://t.co/7MJBd4Wyj1 pic.twitter.com/BdOWAQOgcEDecember 12, 2019

The FRR board considered presentations from key mission managers to come to this conclusion. Managers presented assessments of Starliner, its systems, mission operations, support functions and the readiness of the space station program to support the craft's mission to the station.

While they are still on track to launch the rocket on Dec. 20, they have two additional launch opportunities on Dec. 21 and 23, should they need extra time, Phil McAlister, NASA's director of Commercial Spaceflight Development, said during the teleconference.

"Hopefully we should all be getting an early Christmas present this year," McAlister added about the launch.

Leading up to a Dec. 20 launch, the final late cargo will be loaded onto Starliner this Saturday (Dec. 14). "Within 24-25 hours after launch we should be docking with the International Space Station," Mulholland said. There, NASA astronauts Jessica Meir and Christina Koch will receive the docking spacecraft and bring its cargo onboard. The vehicle will make its return to Earth on Dec. 28, when it will make a parachute-assisted landing at the White Sands Missile Range in New Mexico.

While the vehicle will not have any crewmembers on board, this landing will serve as practice for when they do. There have already been a number of landing simulations completed, Mulholland said, adding that, aside from there being no humans in the spacecraft, this will closely match the landing of a crewed flight. But, while there are no humans on the flight, there is a test dummy named Rosie.

Launching on Starliner with this flight test is "Rosie the Rocketeer," a test dummy named by Leanne Caret, president of Boeing's Defense, Space & Security division, after "Rosie the Riveter," the iconic role model for working women from WW II.

Rosie is outfitted with a multitude of sensors that measure critical data including G-forces endured during the flight to inform the team about what human crewmembers might experience.

"There will undoubtedly be some unexpected results, this is a test," McAlister said. The results of this test will be a "huge confidence building measure," he added, further explaining that the point of the uncrewed OFT is to provide critical data for final certification so that the crewed Starliner launches are a success.

This launch will also be the first flight for a new NASA docking system which will be the "standard docking system for sending humans to Gateway and to Mars," and will be a key part of NASA's Artemis program, Shireman said.

The launch of Starliner's OFT marks a major milestone in commercial spaceflight. "Starliner and crew dragon will signal the beginning of a robust age of space transportation," McAlister said.