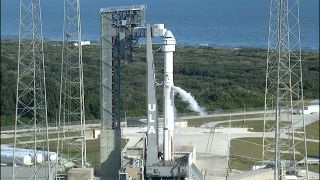 Boeing's first uncrewed test flight of its Starliner spacecraft for astronauts is now set for no earlier than Dec. 20, one day later than planned, due to a SpaceX launch delay earlier this week.

"We successfully conducted a wet dress rehearsal (WDR), a critical pre-launch milestone, on Friday, Dec. 6," ULA representatives said in a statement today. "We were unable to complete the milestone on Thursday, Dec. 5, as planned due to a weather-related launch delay of an International Space Station re-supply mission, which created a range resource conflict. This caused our targeted launch date to shift to the right by one day."

The resupply mission ULA refers to is SpaceX's CRS-19 Dragon cargo flight to the space station, which launched on Thursday (Dec. 5) after its own 24-hour delay due to high winds. A SpaceX Falcon 9 rocket launched the Dragon spacecraft from Space Launch Complex-40 at the Cape Canaveral Air Force Station, which is near ULA's Space Launch Complex-41, where the Atlas V carrying Starliner stands.

"We continue to work closely with Boeing to ensure that the Starliner flies as soon as the spacecraft and launch vehicle are ready," ULA representatives said.

Today's wet dress rehearsal — dubbed an Integrated Day of Launch Test, or IDOLT, in spaceflight jargon — included each step of the launch procedure right up until liftoff. The "wet test" paves the way for the capsule's Orbital Flight Test mission later this month, when the vehicle will make its way to the space station without astronauts aboard.

That flight, in turn, will prepare Boeing and the rest of the Starliner team for the first crewed flight of the vehicle, which is expected to take place next year, also on a United Launch Alliance Atlas V.

During the rehearsal, flight personnel fueled the rocket booster, then tended to the Starliner capsule itself, mimicking the process that will unfold when astronauts take their first flight.

I am sitting in the front row. Thanks to Boeing for their hospitality. It is great to be part of the prelaunch team. https://t.co/0WmwiVbY7xDecember 6, 2019

All told, the test took about six hours to complete, bringing the procedure right up to T-0 in the launch countdown, although the engines did not fire.

NASA astronaut Mike Fincke, who will be flying on the first crewed Starliner mission, was in Boeing's mission control at Kennedy Space Center for the test. He will fly with Boeing astronaut Chris Ferguson (a former space shuttle commander) and NASA colleague Nicole Mann.