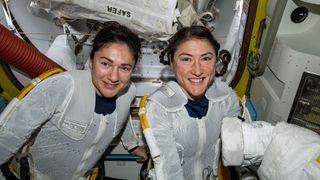 Two NASA astronauts are taking a spacewalk outside the International Space Station today (Jan. 15), and you can watch all the action live online.

For the first spacewalk of the year, NASA astronauts Christina Koch and Jessica Meir will spend about 6.5 hours working in the vacuum of space to continue replacing old nickel-hydrogen batteries on the station's solar arrays with new lithium-ion batteries. The spacewalking duo began working to replace these batteries during a spacewalk together on Oct. 18, and that was the first all-woman spacewalk in history.

The spacewalkers are scheduled to emerge from the Quest airlock shortly after switching their spacesuits over to battery power at about 6:50 a.m. EST (1150 GMT). NASA will provide live coverage of the spacewalk beginning at 5:30 a.m. EST (1030 GMT), and you can watch it live here on Space.com, courtesy of NASA TV.

Related: The amazing spacewalks of Expedition 61 in photos

Today's spacewalk will be the first of three spacewalks scheduled to take place this month. On Monday (Jan. 20), Meir and Koch will take another spacewalk together to wrap up the battery replacement work.

If these two spacewalks go according to plan, NASA astronaut Andrew Morgan and European Space Agency astronaut Luca Parmitano will conduct another spacewalk on Jan. 25. For their spacewalk, Morgan and Parmitano will continue ongoing work to upgrade an old dark matter experiment outside the space station called the Alpha Magnetic Spectrometer. They will be completing the installation of a new cooling apparatus, which they started doing in a series of three spacewalks in November and December.