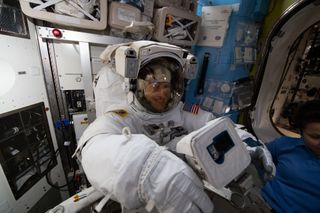 NASA astronaut Christina Koch gets fitted in her spacesuit ahead of her first spacewalk on March 29, 2019.
(Image: © NASA)

The spacesuit gloves of a NASA astronaut were contaminated during the historic all-woman spacewalk on Friday (Oct. 18), but it's probably just space grease.

This past Friday, NASA astronauts Christine Koch and Jessica Meir embarked on a spacewalk to replace one of the International Space Station's battery charge-discharge units (BCDU) after it failed following a previous spacewalk on Oct. 11. The spacewalk was successful as the unit was replaced, with the astronauts also completing some "get ahead" or extra tasks. However, when the astronauts re-entered the station, there was a contaminant on one of Koch's gloves.

But it's most likely that this "contaminant" is just grease from the station's Canadarm2 robotic arm, Koch said during a post-spacewalk webcast today (Oct. 21).

To transport the bulky replacement BCDU in space, Koch had the unique task of riding on the robotic arm. Koch referred to riding the arm as "an incredible privilege. It's something we do train for but since it's rare, not many people actually get the experience of doing that," she said during the webcast. "Part of what that involves is actually installing a foot restraint on the end of the arm, the end that's actually normally just meant to grapple to, say, a visiting cargo vehicle."

"And so," she continued, "of course, a mechanical component like that has grease and lubrication. And what the engineers think at this point is that my hand just brushed up against some of that when I was installing that foot restraint."

So, while a "contaminated spacesuit glove" might seem mysterious or dangerous, it looks like the glove just has some grease on it from Canadarm2. Koch said during the webcast that the gloves are now being analyzed inside the space station and the contaminated glove is "just a little it stained."

"Unfortunately, I wish I could stay just as clean when I'm in my spacesuit as I attempt to do when I'm eating in the galley and our food floats around," Koch joked, reemphasizing that the glove contamination is really no big deal. "It shouldn't be any kind of a big deal to take from here," she said.