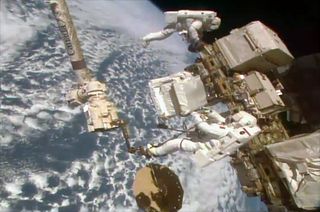 Astronauts successfully transplanted a new coolant pump system outside of the International Space Station, completing the third in a series of at least four challenging spacewalks to repair a $2 billion cosmic ray detector.

Luca Parmitano of the European Space Agency (ESA) and Andrew Morgan with NASA continued performing "surgery" on the Alpha Magnetic Spectrometer (AMS) on Monday (Dec. 2), two weeks after they began the complicated effort to replace the cooling system for the state-of-the-art science instrument. The AMS, which was installed in 2011 to search of "dark matter" and "dark energy," was in danger of being permanently disabled had the Upgraded Tracker Thermal Pump System (UTTPS) not been installed.

"Okay Luca, you've got everything connected. We're going to power up the box if you're good with that," radioed Canadian astronaut Jeremy Hansen, who guided the spacewalkers through their work from inside Mission Control in Houston.

"I am very happy with that," replied Parmitano. "Crossing my gloved fingers and my booted toes."

The AMS was launched with four carbon dioxide coolant pumps needed to keep its detectors at the proper temperature to function. Those pumps began failing in 2014, leaving just one working when the spacewalks to add the upgraded pump module began in November. Had nothing been done, the final original pump was expected to fail within a matter of months.

After allowing the time for flight controllers to configure and verify the installation, Hansen reported the spacewalkers' success.

"We have good insight into the new pump box. We have good power, good pressure and we can tell the refill valve is open, so that is excellent," Hansen said.

"Alright! That warms my fingertips — that and the glove heaters," joked Parmitano.

With the new module in place and powered, Parmitano and Morgan turned their focus to connecting the UTTPS lines to the AMS. Returning to their previous work sites from their EVAs performed on Nov. 15 and Nov. 22, Parmitano used some of the more than 20 specialized tools designed for this series of repair spacewalks to swage the original stainless steel tubes with the new feed lines.

"Now the extraordinary patience part," said Hansen, describing the work to splice the lines. "We will take our time with this as this is exactly what we came out to do today."

Parmitano, assisted by Morgan, first used a tool called a "clean cutter" to uniformly cut the small steel tubes that were roughly severed during their second spacewalk. He then used a "tube straightener" to ensure the ends would align, before attaching an "alternate tube fitting" that pinched the mated lines for a good fit.

Parmitano and Morgan carefully repeated the cutting, straightening and pinching process eight times — six times working with tubes on one side of the AMS and then twice with tubes on the other. Parmitano, working from a perch at the end of the space station's Canadarm2 robotic arm, and Morgan, tethered but free floating near him, completed the splice work 4 hours and 40 minutes into the 6 hour and 2 minute EVA.

"This one's for the AMS team that has been working on this for the last four years," said Morgan as the eighth and final coolant tube was swaged.

The AMS was not designed to be worked on in space and is positioned high atop the station's truss, making the repair the most complex spacewalks in the decade since the final servicing of the Hubble Space Telescope in 2009.

“Human spaceflight is about technology, science and exploration," said Parmitano once he was back inside the airlock. "I think that today, as we did the EVA, we kind of put to practice the three of them."

"Technology, it involved not only the development of the pump, but also the fact that we could install it and swage tubes that we had cut specifically for this job," said Parmitano. "Science, obviously, is putting all this work into restarting AMS, the most important astrophysics instrument on the International Space Station and hopefully giving it many, many more years of science."

"And exploration, because science is exploration in this case. We are exploring the furthest and most unexplored parts of the universe by proxy using science."

On their next spacewalk dedicated to the AMS, Parmitano and Morgan will clean up their work area and prepare the device to resume operation. A date for that fourth and possibly last EVA in this series is still to be scheduled, though likely will not be before the new year.

Monday's spacewalk, which ended at 12:33 p.m. EST (1733 GMT), was the 224th in support of space station assembly and maintenance since 1998 and the 11th this year. It was the fifth career spacewalk for Parmitano and the sixth for Morgan.