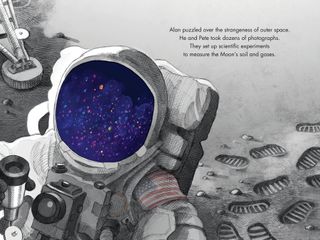 Illustrations of "The Astronaut Who Painted the Moon" tell the story of Alan Bean's journey to the lunar surface.
(Image: © Scholastic Inc.)

In a new children's book, young readers can experience walking onto a new world through the eyes of Apollo 12 moonwalker and painter Alan Bean.

"The Astronaut Who Painted the Moon," an illustrated book about Bean's mission to the lunar surface, starts off with Bean preparing for liftoff aboard Apollo 12, the second crewed mission to the lunar surface, which took place in 1969. The illustrations then travel back in time to when Bean was a young boy dreaming of becoming a pilot and then forward in time to when he was inspired by what he saw from the cockpit to learn how to capture what he saw on a canvas.

The book then transports readers to the surface of the moon, as seen through Bean's eyes. The artist adorns the lunar surface in captivating colors and a view of Earth in the distance.

Back on Earth, Bean tries to describe the beauty of what he saw on the moon but struggles to do so in words or photographs. Instead, he begins to paint. The book captures Bean's process, from building 3D models of the moon's surface to adding bright colors and elements of outer space into his pieces.

Bean got to display his paintings at the National Air and Space Museum in Washington, and he hoped to inspire others to journey into new worlds. The astronaut passed away in May 2018.

Sean Rubin provided the illustrations to the book, while journalist and storyteller Dean Robbins told the story of the astronaut and painter. Robbins spoke to Space.com about his experience telling Bean's story and the writing process behind the book.

Space.com: What first drew you into Alan Bean's story?

Dean Robbins: I grew up during the space program's heyday in the 1960s and '70s, so astronauts have always been my heroes. In elementary school, I kept a thick astronaut scrapbook with all my favorite pictures and newspaper stories. To this day, I'm drawn to any headline with words like "moonshot," "countdown" or "Apollo."

A few years ago, I was reading an online article about the space program and noticed a link to profiles of the 12 astronauts who walked on the moon. Well, there's no way I'd bypass something like that. I read every profile and found no surprises — until I got to Alan Bean. To my amazement, the article noted his distinguished career as a painter. I explored further and learned that Bean is the only artist to have traveled in outer space, creating deeply personal images of his trip to the moon. I couldn't believe I'd never heard about this unique body of work. I thought it would make a great story for young readers — a thrilling mix of science and art. That was the genesis of "The Astronaut Who Painted the Moon."

Space.com: What was the process of learning Bean's story and transforming it into the book?

Robbins: Bean had written books about his life, though not for young readers. "The Astronaut Who Painted the Moon" would be the first picture book on the subject, requiring a simple approach to complicated concepts. How is the moon different from Earth? What is an artist? How do artists communicate their feelings? What can a painting tell us about the moon that a photograph can't? What was special about Bean's perspective as both a scientist and a painter?

I immersed myself in these subjects and tried to craft a dramatic story that would connect with kids between [age] 4 and 10. I also overcame my shyness about contacting one of my lifelong heroes and wrote Alan to see if he'd collaborate with me on "The Astronaut Who Painted the Moon." He stunned me by writing back immediately, offering to read my manuscript and even contribute images of his own art. It was a highlight of my life to work with this wonderful man before he died last year, and I'll always cherish his kind words about the book.

Space.com: How did you balance between delivering accuracy in the story and allowing room for the illustrations?

Robbins: With Alan reviewing the manuscript of "The Astronaut Who Painted the Moon," I breathed a sigh of relief about the facts. What a luxury to get editing assistance from the subject himself! The illustrator, Sean Rubin, was also devoted to accuracy, poring over vintage photographs and conducting research at the Smithsonian National Air and Space Museum.

For all his concern with historical detail, however, Sean's main goal was to make magic. He rose to the challenge of evoking another artist's vision in his own style, creating a beautiful work of art in its own right. He packs every page with wit, surprises and loveliness. My favorite spread features a sublime image of the Apollo 12 astronauts taking their first steps on the moon, with the blue-and-white Earth hovering in the distance. The spread contains no words, but the illustration alone suggests why Bean was so driven to paint this mysterious place.

Space.com: What do you think was so special about this particular mission to the moon?

Robbins: As only the second manned mission to the moon, Apollo 12 had tremendous scientific value. Bean and Pete Conrad collected samples and set up several experiments. But we shouldn't underestimate the mission's artistic value — the benefit to humanity of having a sensitive painter onboard to interpret what he saw and felt. Back on Earth, Alan chronicled his impressions of viewing our fragile planet from 240,000 miles [390,000 kilometers] away, of jumping around on the lunar surface, of gazing at a weirdly shiny sky that reminded him of black patent leather. As we see in "The Astronaut Who Painted the Moon," his work brings a human perspective to the barren beauty of outer space.

Space.com: How do you hope this story inspires its young readers?

Robbins: I hope the book inspires awe about both science and art. Science got us to the moon, but art showed us how it felt to walk through that strange new world.

I also hope "The Astronaut Who Painted the Moon" helps spread the word about a one-of-a-kind hero named Alan Bean. He's a lesser-known astronaut, despite being the fourth person to walk on the moon, the first artist in space and one of the most extraordinary figures in human history. If a new generation grows up wanting to be as creative and courageous as Capt. Bean, I'll feel that I did my duty.