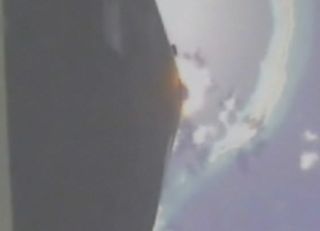 A view from SpaceX's Falcon 1 rocket shortly before video transmission terminated two minutes and 20 seconds into the third test flight on August 2, 2008. A SpaceX spokesperson said that mission control had reported an "anomaly."
(Image: © SpaceX)

WASHINGTON -Space Exploration Technologies (SpaceX) is making preparations for a Falcon 1launch attempt that could occur as soon as Sept. 23, according to an updateposted on the Hawthorne, Calif.-based rocket company's Web site.

"Ifpreparations go smoothly, we will conduct a static fire on Saturday [Sept. 20]and launch sometime between Tuesday [Sept. 23] and Thursday [Sept. 25]," SpaceXchief executive Elon Musk wrote in an update posted Sept. 19. "TheSpaceX team worked hard to make this launch window, but we also took the timeto review data from Flight 3 in detail."

A Falcon 1 failedto reach orbit for the third consecutive time Aug. 3 when a staging issuebrought the flight to an end about two minutes and 20 seconds into the flight.Musk said at the time that fixing theproblem would be as simple as inserting more time between the separation ofthe rocket's first stage and the ignition of its second-stage engine.

Musk wrotein his update that it was possible SpaceX could encounter issues during theupcoming preparations that would cause the company to forfeit its lateSeptember launch window, forcing the company to postpone to the next availablewindow in late October.