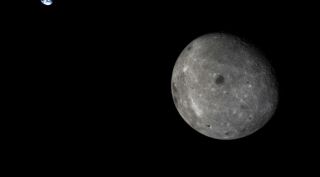 The far side of the moon and distant Earth, imaged by China's Chang'e 5 T1 mission service module in 2014. The Chang'e 4 mission will launch toward the far side on Dec. 7, 2018.
(Image: © Chinese Academy of Sciences)

China is getting set to launch the first-ever surface mission to the moon's far side.

If all goes according to plan, Chang'e 4's lander-rover duo will touch down within the moon's South Pole‐Aitken (SPA) basin after a 27-day flight, then study both the surface and subsurface of this region. [China's Moon Missions Explained (Infographic)]

Both the lander and the rover were designed as backups for China's successful Chang'e 3 mission, which put a lander and a rover named Yutu down on the moon in December 2013.

As a prelude to the Chang'e 4, China launched the Queqiao relay satellite this past May. Queqiao is now positioned at the Earth-moon L2 Lagrange point — a place where the spacecraft can handle communications between ground controllers and the lander-rover mission on the far side.

Chang'e 4 is expected to touch down in Von Kármán Crater, within the SPA basin.

The mission, Jia and team members wrote, aims to complete:

The radio-astronomical study is particularly intriguing. The lunar far side always faces away from Earth, so it's is free from interference from our planet's ionosphere, human-made radio frequencies and auroral radiation noise. Solar radio emission is also blocked during the lunar night.

"Hence, the lunar far side has been believed as the best place for the low-frequency radio astronomical observation," the researchers wrote in the recent paper.

The paper also detailed the eight scientific payloads toted by the mission.

The Chang'e 4 lander carries the Landing Camera (LCAM), the Terrain Camera (TCAM), the Low Frequency Spectrometer (LFS), and the Lunar Lander Neutrons and Dosimetry (LND), which was provided by Germany. The rover has four instruments as well: the Panoramic Camera (PCAM), the Lunar Penetrating Radar (LPR), the Visible and Near-Infrared Imaging Spectrometer (VNIS), and the Advanced Small Analyzer for Neutrals (ASAN), which was provided by Sweden.

The LFS was newly developed for Chang'e 4 lander; the other native Chinese payloads are inherited instruments from Chang'e 3, the researchers wrote.

The LPR instrument will likely be able to detect subsurface structure on the robot's patrol route, and to detect the thickness and structure of the lunar regolith. The device is a nanosecond impulse radar with bistatic antennas.

It works like this: An ultra-wideband nanosecond impulse is produced by a transmitter, and then sent through the transmitting antenna down to lunar surface. The echo signal from the underground target is received by the receiving antenna, amplified in the receiver and then restored as a data record.

According to a story earlier this year by China's state-run Xinhua news agency, Chang'e 4 will also carry a tin containing seeds of potato and arabidopsis, a small flowering plant related to cabbage and mustard. It may also tote silkworm eggs.

The SPA basin is the largest and oldest impact basin of the moon. Although the terrain is low, this region is not filled with mare basalts as other moon basins are, Jia and colleagues noted, suggesting that it may have a special thermal history and unique evolution features.

Studying the materials in the region could therefore help reveal the composition of the crust and even the mantle of the moon, the researchers wrote.

China's next lunar probe, Chang'e 5, is designed to bring select samples from the moon back to Earth. It builds upon a progression of Chinese moon explorers: the Chang'e 1 and Chang'e 2 orbiters in 2007 and 2010, respectively, Chang'e 3 in December 2013, and Chang'e 5 T1, which launched a test capsule on an around-the-moon journey in October 2014. The capsule parachuted safely back to Earth eight days after liftoff.