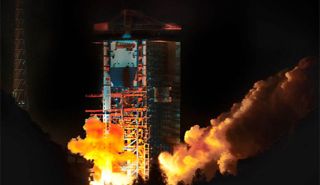 China's Queqiao relay satellite for the country's Chang'e 4 mission to the far side of the moon launched into space atop a Long March 4C rocket on Monday, May 21, 2018 Beijing Time (Sunday, May 20 EDT).
(Image: © China Aerospace Science and Technology Corporation)

China just launched a spacecraft that will help pave the way for a historic mission to the moon's far side later this year.

Queqiao is now its way to the Earth-moon Lagrange point-2, a gravitationally stable spot about 40,000 miles (64,000 kilometers) beyond the lunar far side. The satellite will set up shop there and wait for China's robotic Chang'e 4 lander-rover spacecraft, which is expected to launch in November or December. [China's Moon Missions Explained (Infographic)]

If all goes according to plan, Chang'e 4 will become the first craft ever to touch down on the moon's far side, which forever faces away from Earth. (The moon is "tidally locked" to our planet, so we only ever see the near side.) Queqiao will relay commands and data between the Chang'e 4 lander and its handlers here on Earth — a job the lander and rover can't do for themselves, because all that moon rock would get in the way.

Queqiao is also carrying a radio-astronomy package called the Netherlands-China Low-Frequency Explorer (NCLE), which will hunt for radio emissions from the universe's infancy, study space weather, characterize the radio environment of the Earth-moon system and make a range of other measurements.

NCLE is a pathfinder experiment; its observations should aid in the design and development of a future radio-science instrument that will study the heavens from a perch in space or on the moon, team members have said.

Also riding to space today with Queqiao were two microsatellites called Longjiang-1 and Longjiang-2, which will also do some radio-astronomy research.

Longjiang-1 and -2 were developed by the Harbin Institute of Technology. HIT is in China's Heilongjiang Province, which apparently explains the microsatellites' names. ("Heilongjiang" means "Black Dragon River;" it's the Chinese name for the river the Russians call the Amur, which forms part of the China-Russia border. "Longjiang" means "dragon river.")

While we're on the subject of names: "Queqiao" means "bridge of magpies" and is a nod to a Chinese folktale. In this story, "magpies form a bridge with their wings on the seventh night of the seventh month of the lunar calendar to enable Zhi Nu, the seventh daughter of the Goddess of Heaven, to cross and meet her beloved husband, separated from her by the Milky Way," China's state-run Xinhua news service explained.

"Chang'e," meanwhile, is the Chinese moon goddess. The robotic Chang'e program has been going strong for more than a decade, and it's been notching milestone after milestone.

The first two missions, Chang'e 1 and Chang'e 2, launched orbiters to the moon in 2007 and 2010, respectively. Chang'e 3 put a lander and a rover (called Yutu, "Jade Rabbit") on the lunar surface in December 2013. The next year, the Chang'e 5 T1 mission sent a small capsule around the moon and landed it back on Earth. This was prep work for the Chang'e 5 lunar sample-return mission, which China plans to launch in 2019.

Over the long haul, China aims to establish a permanent presence on the lunar surface, Pei Zhaoyu, deputy director of the China National Space Administration's Lunar Exploration and Space Program Center, said at a conference last month, according to Xinhua.

Pei "proposed an unmanned lunar research station in about 10 years to accumulate technical expertise, and a lunar research and development base around 2050," Xinhua reported. "The base would be operated by robots over the long term, and visited by humans, Pei envisioned."