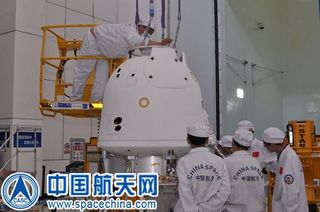 Technicians work on the test capsule for a lunar mission unofficially dubbed "Chang'e 5 T1" ahead of its Oct. 23, 2014 launch. The mission was designed to test re-entry technology for a future lunar sample-return mission.
(Image: © CASC)

A Chinese moon probe came screaming back to Earth Friday (Oct. 31), just as many folks were heading out to go trick-or-treating.

Chang'e 5 T1 launched on Oct. 23 atop a Long March 3C rocket, then completed a flyby of the moon before swinging back toward home. The mission sent a test capsule barreling into Earth's atmosphere Friday at 25,000 mph (40,000 km/h); the capsule survived the harrowing trip intact and touched down as planned in north China's Inner Mongolia Autonomous Region, the state-run Xinhua news agency reported. [Greatest Moon Missions of All Time]

Chinese officials said the data gathered during the mission should help researchers design and build a capsule that will bring lunar rocks and dirt to Earth, which China hopes to accomplish by 2017.

China is currently embarked on an ambitious moon-exploration program that started in 2007 with the launch of the Chang'e 1 lunar orbiter. Chang'e 2, another orbiter, followed in 2010, and in December 2013 the Chang'e 3 mission put China's first lunar rover down on the moon. ("Chang'e" is a moon goddess in Chinese mythology.)

The country also aims to put people on the moon, perhaps sometime in the 2020s.

Chang'e 5 T1 also carried the first private mission to the moon as a piggyback payload. Luxembourg-based LuxSpace's 4M mission hitched a ride on the Long March 3C, then stayed attached to the rocket's upper stage for a lunar flyby and return to Earth.

The 31-pound (14 kilograms) 4M payload and the rocket stage were expected to end up circling Earth rather than re-enter the planet's atmosphere.

The 4M mission has been transmitting signals continuously during its trip to the moon and back, and LuxSpace wanted radio amateurs around the world to tune in; their data could help develop and demonstrate a new crowd-based spacecraft tracking and navigation system, mission team members said. 4M also carries gear to measure radiation levels in Earth-moon space.

The private mission was partly an homage to Manfred Fuchs, the founder of LuxSpace's parent company OHB, who died in April. (4M stands for "Manfred Memorial Moon Mission.") The entire cost of 4M is less than $1 million, LuxSpace representatives have said.